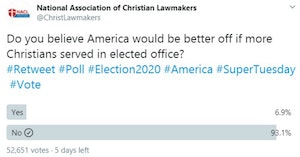 The National Association of Christian Lawmakers was not pleased when they found out the results of their recent Twitter poll asking if “America would be better off if more Christians served in elected office.” They probably expected the results to be mostly contained to their 289 followers, but that’s the trouble with Twitter polls—anyone with a Twitter account can vote on them.

Plus, people tend to notice when groups are clearly trying to skew one of these polls toward a particular result. And they don’t like it. Case in point, the NACL’s currently sits at over 49,000 votes, and the answers are definitely skewed.

As of this article’s publishing, the poll sits at 93.2 percent “No” and there are five days left to vote. It would appear that some non-Christians heard about the poll and decided to offer their input.

The National Association of Christian Lawmakers noticed, writing in a follow-up tweet that the votes and comments on the poll are indicative of “religious persecution and anti-Christian bigotry.” Not a bad deal when you compare it to other kinds of religious persecution, but sure.

View the comments on this thread to see what religious persecution and anti-Christian bigotry looks like in America. Satanists and Atheists piled on this poll and have begun leaving vile messages as well. @NBCNews @ABC @seanhannity @FoxNews @CBSNews @LifeSite @CBNNews https://t.co/fQ3sYFMqzD

“Satanists and Atheists piled on this poll and have begun leaving vile messages as well,” the Christian group wrote. “Vile messages” have included people pointing out that the U.S. was never meant to be a “Christian nation” as some have claimed and that there are already plenty of Christians currently serving in elected office.

In fact, the U.S. federal Congress is currently 90 percent Christian, making it almost as skewed as this poll after “Satanists and Atheists” got their hands on it. As a whole, more and more U.S. residents are considering themselves non-religious, with only 65 percent identifying as Christian today.

But surely that trend will reverse if only more Christians tell everyone else that they’re sinners who are going to hell.

We always appreciate God bringing sinners to our platform. For here they will be told the truth. Sin will send you to hell. Salvation and forgiveness will lead you to heaven. pic.twitter.com/ES0uJhBvxG

The NACL was formed in 2019 after Arkansas State Senator Jason Rapert became very concerned about the number of witches in the country, linking to a Newsweek article about an increasing Millennial interest in pagan traditional practices and lamenting about the “rise of the occult” in a recruitment email.

Just look at all these scary Satanist witches tweeting evil curses at Christians in the comments:

I think America would be better off if people who claimed to be Christian actually conducted themselves the way Christ told them to.

As a Christian, no hecking way.

I voted but feel like this needs be said. I have no issue with christians being in elected offices. I DO take issue when said Christians promote their own religion while actively suppressing and even outright attacking other belief systems.

We are a nation of many religions and backgrounds. We need Christian, Jewish, Islamic, Native, Atheistic, Buddhist, etc. people in Congress so that everyone has representation (and not just based on religion)

Gawd no!
Look at the fake Christians in this administration.
No one needs more of that.
Separation of church and state is the only way to govern effectively.
Religion and politics are hot button issues, combine the two and you’re asking for unrest.

As a religious (Jewish) child, I saw the result of Christian-imposed legislation.

My uncle’s shop could not be open on Sunday.

His wife died on a Friday night, we could not legally bury her until Monday.