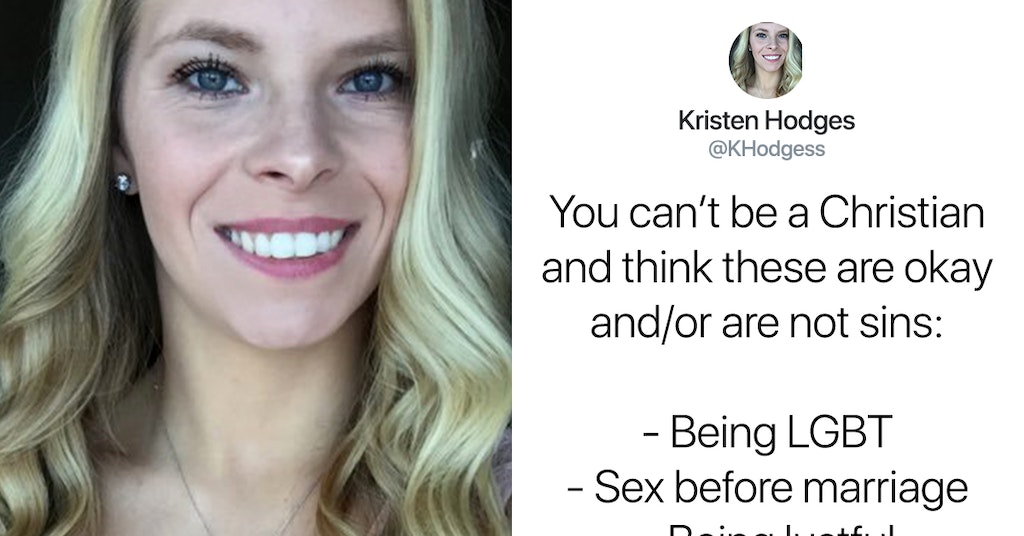 And a screenshot, for posterity:

Some of these are arguably listed in the Bible as sins. Others, like “being LGBT,” are not. Most of them are things nearly everybody does on a regular basis.

It’s likely that Kristen here didn’t mean that anyone who does these things at any point in their lives won’t get into heaven. You just need to be ashamed of doing them, because they are sins. Make sure to remember that you are an evil sinner every time you pleasure yourself or generally want to engage in sexual activity.

The greatest tweet I have encountered on this site pic.twitter.com/RiaDy2Rlry

Whether you’re crankin’ it or not, it would definitely be a sin to engage in any or most or even all of the activities that Kristen Hodges listen just to spite her, as many Twitter users are doing right now.

if i do all these things at once do they cancel each other out? https://t.co/zx4G2zmupZ

Sorry Kristen you're wrong because my lustful bisexual ass is going straight through heavens gates also God loves when his little princess (me) is mad https://t.co/BNC26ERCsI

So I can check all these on the list. What do I win? https://t.co/4LCMqXo7NL

Jesus went back to His tomb just to roll over in it https://t.co/GvQh0FlzS1

Not to brag, but I could knock out all seven in an afternoon.

All jokes aside, Hodges is getting a pretty good Bible lesson from all this ratio.

You can't be a Christian and think you get to decide who does and who doesn't get into heaven. https://t.co/IjsYxv6Lqs

Everyone sins if you knew anything about God you would know so long as anyone seeks forgiveness they would be forgiven. But hey marinate in your obsolete delusions with the rest of a regressive society at your local Chick-fil-A

I mean, y'all removed a whole book from the bible where Jesus literally goes to hell & takes everyone to heaven, but sure. Also I know plenty of Christians who are gay, so like, you can be. Unless you mean it's immoral, but so is judging ppl, so you're walking a thin line there. https://t.co/OhNKMjpwxB

This is just obvious stuff; I don't know why people are getting mad. But also, if you are a Christian, you must

– stone your children to death when they don't listen to you
– kill all male prisoners of war (you can marry the women)
– never touch a menstruating woman https://t.co/qfzOTyhCRy

"God loves everyone."…and he is supposed to be the final word, so why do you think you have ANY say in who does or doesn't go to heaven? https://t.co/pAbGJxx0JV

Noah was a drunk
Peter was a liar
Paul was quick to anger, and a murderer
Mary M was an adulterer

The Blood of Jesus washes the multitude, or did you forget every single lesson taught in the first 4 of New Testament? https://t.co/v6X28GVsgh

Oddly, the thing you really can't do to be a Christian is judge others. Unlike any of the sins you condemn others for, Jesus actually warned us about that. https://t.co/zcosTzdh7h

Well my grandma, who I'm sure has much more practice at being a "good christian" than you do Cindy Lou Who, says you can't be a Christian and tell others how to live or be a Christian. https://t.co/LsYHk8hexy pic.twitter.com/07G7h72Zk6

"Can't get drunk and be a christian"….why does your book say jesus turned water into wine if not to get wine-drunk? checkmate https://t.co/6bRB4MzSL3

“Judge not, lest ye be judged” is pretty straightforward, Kristen. Matthew 7:1.