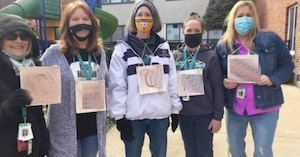 Christian Teachers Use A Slur During “Scrabble” Activity, And People Argue Whether It Was Intentional

A group of five teachers from Missouri’s Christian School District were captured using a racial slur in a school activity that was then reportedly shared on social media.

According to First Coast News, what started as “a game of human Scrabble” turned into a photo that showed five faculty members from the Christian School District “rearranging letters to form the word ‘c**ns.'”

Someone then posted it to social media, parents said it was even on the school district’s website.

As the First Coast News story noted, Principal Jake Ibbetson said that the photo was never posted to the school’s website or any of the school’s social media accounts.

But it still went public, and people associated with the school involved are upset.

“They were running around trying to spell raccoon, but they didn’t have the R and the A,” said Pastor Raymond Horry, a parent who has two children enrolled in the district. “I don’t believe it that five Caucasian teachers, not one of them knew that. Maybe one didn’t know it, maybe two didn’t know it, but all five didn’t know it?”

“I’m angry,” said another parent with a child in the district, “I’m hurt because I trust you with my child.”

Though not everyone was convinced the teachers meant to form a slur.

The district issued a lengthy statement which said, in part, “Over the weekend pictures were posted to a personal page on social media featuring Christian School District employees.”

“One of these pictures included an abbreviated word that has racial connotations. As soon as this was brought to the attention of the individual who posted it, the picture was removed.”

“Christian School District has been investigating and addressing the incident since it was brought to our attention. Appropriate disciplinary action will occur after the investigation is complete. We are spending time listening to those impacted, providing support to help repair relationships, and identifying necessary steps in moving forward together.”

The statement also labeled it an “ill-informed action” and apologized for the hurt and offense it caused.

Incidentally, according to the online version of the Official Scrabble Player’s Dictionary, “c**ns,” which it defines as “short for racoons,” is a playable Scrabble word.