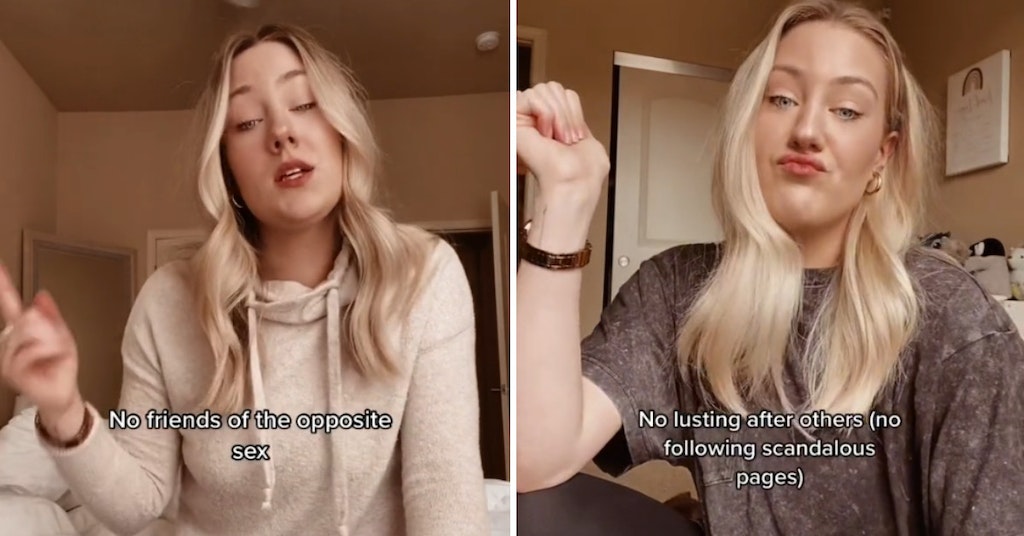 A Christian woman has gone viral on TikTok for a pair of videos in which she shares a lengthy list of rather strict rules she and her husband follow within their marriage, some of which have been condemned as controlling and unhealthy, or at least born out of deep insecurity and jealousy issues. The TikTok user, who goes by Bailey, starts the first video by saying that these rules make other people “angry,” but most of the comments appear to be either mocking or expressing genuine concern—both for Bailey and anyone who’s taking her seriously.

Bailey, like many white Christian ladies who make internet videos, seems to think her reveal of these rules is going to “start a riot” based on the song that she lip-syncs to, because she apparently thinks that cringe-inducing sad marriages are uncommon or surprising among folks like her. In reality, many Christian couples, as well as those simply trapped in toxic and even abusive relationships, have talked about following similar rules.

That does not make the list less horrifying, just not exactly revolutionary. In fact, many of these rules might sound familiar as though they were followed by a recent U.S. Vice President.

Neither video stated whether or not Bailey’s husband calls her “mother.” And part two doesn’t get any better.

“No lusting after others (no following scandalous pages),” Bailey continues. This is followed by the word “No” with the corn on the cob emoji, which seems to mean that neither is allowed to consume pornography. “Always put each other first (even over parents).”

It’s not clear whether that last rule also extends to the couple’s 18-month-old daughter.

Comments have been turned off from both videos after they collectively gained over three million views. Apparently, people were too “angry” about these rules for Bailey to handle, regardless of the tough guy song or her many shrugging gestures in an attempt to indicate that she doesn’t care what people think.

Unfortunately for her, the videos reached Twitter, where people were free to comment all they wanted. Things went about the same as every other time Christian couples try to brag about having extremely restrictive marriage rules that just sound like creepy and controlling behavior.