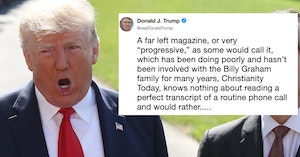 “Profoundly Immoral”—Top Evangelical Magazine Calls For Trump Removal, And He’s Tweeting About It

If you’re not an Evangelical Christian, you might not understand why this is big news, but here we go: Christianity Today‘s editor in chief Mark Galli has published an op-ed stating explicitly that Donald Trump should be removed from office. That’s huge, because much of Trump’s base is composed of Evangelical Christians, and other groups of people who see themselves as Christians and say stuff like, “Bring God back into the White House!” and actually think Trump is doing that.

The line between politics and religion has always been very thin, despite our nation’s best intentions to separate church and state. In his op-ed, Galli writes that CT tries to stay out of politics, though they did weigh in on Bill Clinton’s impeachment hearings and made comments during Nixon’s. But, Galli writes, he can’t stay out of it anymore:

We have reserved judgment on Mr. Trump for years now. Some have criticized us for our reserve. But when it comes to condemning the behavior of another, patient charity must come first. So we have done our best to give Evangelical Trump supporters their due, to try to understand their point of view, to see the prudential nature of so many political decisions they have made regarding Mr. Trump. To use an old cliché, it’s time to call a spade a spade, to say that no matter how many hands we win in this political poker game, we are playing with a stacked deck of gross immorality and ethical incompetence.

Galli argues that is Evangelical Christians don’t take a stand against Trump, they don’t have a leg to stand on about anything.

The post has kicked up quite a dust storm on Twitter, so of course, it caught the eye of the president himself. And he is very unhappy about it. In a series of tweets, Trump called Christianity Today “very progressive” and warned the Evangelical community that it’s HIM, or it’s some lefty who will steal their guns:

A far left magazine, or very “progressive,” as some would call it, which has been doing poorly and hasn’t been involved with the Billy Graham family for many years, Christianity Today, knows nothing about reading a perfect transcript of a routine phone call and would rather………have a Radical Left nonbeliever, who wants to take your religion & your guns, than Donald Trump as your President. No President has done more for the Evangelical community, and it’s not even close. You’ll not get anything from those Dems on stage. I won’t be reading ET again!

He also ended by saying he won’t read “ET” again, which is either a typo or an attack against a friendly little alien.

….have a Radical Left nonbeliever, who wants to take your religion & your guns, than Donald Trump as your President. No President has done more for the Evangelical community, and it’s not even close. You’ll not get anything from those Dems on stage. I won’t be reading ET again!

But the cat is out of the bag, and everyone is talking about this piece and the influence it could have on voters for Trump:

I live outside the United States and as such, am keenly attuned to what is exported from there, especially culturally. Evangelical believers around the world take a lot of cues from the U.S. (fwiw), and this alignment has been excruciating to watch because of that. Thank you, CT. https://t.co/IR32Ehu452

This is big: Christianity Today calls for Trump’s impeachment.

“It’s time to call a spade a spade, to say that no matter how many hands we win in this political poker game, we are playing with a stacked deck of gross immorality and ethical incompetence." https://t.co/kIkRTfJRHt

This isn't some liberal rag, by the way. This is Billy Graham's editorial. And as a Christ follower, I loved Billy Graham's prescience to use the Word of God to unify people. That's what moral authority looks like, and that's what the Great Commission calls for. https://t.co/wqyEntUCur

This is huge news. CT is part of the Conservative Evangelical machine that got Trump elected, and overlaps the heart of his base. It is a harbinger of change that they have made this statement. Trump will be silent. If he crosses them, it will all fall apart for him quickly. https://t.co/oETfQzyMJA

I don’t think Trump knows how to stay silent about anything, but we’ll see who is more powerful. There are a number of tweets from Evangelicals who are very unhappy with Christianity Today’s position as well:

I will never read or support anything you print again. You should never take political sides. I am sickened by this.

Mr Galli, your support for Progressive Democrat’s unconstitutional action just cost you a Christian reader. I suspect many more will do the same. Your self-perceived moral superiority trumps the US Constitution? Protecting the unborn? Protecting kids from transgender abuse?

Wow, this is the second article that is not right. We are to pray for our leaders. Trump may be rough (says things I dislike) but stands up for Christians, is Pro-Life & tries to work for the American people. King David as I recall was not perfect yet our God called him to lead.

Well, Christianity Today finally found a way to get Liberals to read their magazine by bashing the President.

I ask you this, CT….should I support a Party that openly supports the murder of millions of innocent babies, and a party that normally considers you to be hate speech? https://t.co/szpdqbaCTy

Yes, God help us all! Or in the words of Galli, “To the many Evangelicals who continue to support Mr. Trump in spite of his blackened moral record, we might say this: Remember who you are and whom you serve. Consider how your justification of Mr. Trump influences your witness to your Lord and Savior. Consider what an unbelieving world will say if you continue to brush off Mr. Trump’s immoral words and behavior in the cause of political expediency.”