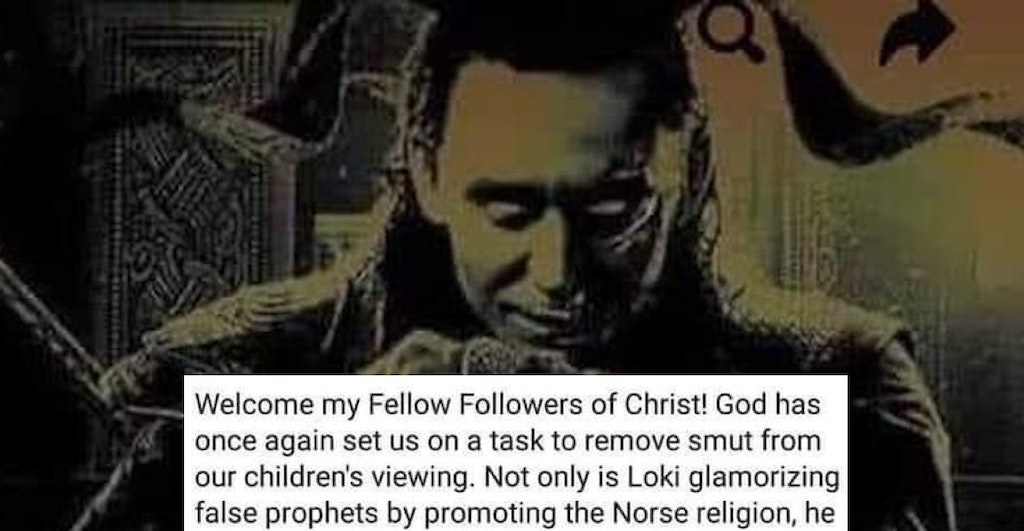 Christians Are Organizing Against Loki Show On Disney+

Christians online seem to enjoy two things immensely: posting about blessings and posting about things they’re boycotting. That’s why they need to keep coming up with new things to be pissed about. Today, they’re pissed at Disney because of a new show on their streaming channel called Loki, starring the titular character as played by Tom Hiddleston.

There is apparently a Facebook group with over five thousand members absolutely enraged by the show. A screenshot of their about page was shared on r/InsanePeopleFacebook by u/Their0nDRUID.

“Welcome my Fellow Followers of Christ!” it starts. “God has once again set us on a task to remove smut from our children’s viewing.”

It continues: “Not only is Loki glamorizing false prophets by promoting the Norse religion, he will also be ‘gender fluid.’ Disney has been leading the charge with liberal propaganda and we can not allow them to continue. We will boycott this show as well as Disney+ and all their shows.”

Sure you will, chief.

It is true that there has been the implication that Loki is “gender fluid” in the sense that he can literally transform his entire body into another body and frequently does, including taking the form of a woman. It’s canon in various comic books, but these Christians are just getting the news.

A few commenters have commented that the page is parody, but it’s set to private right now. It also seems like their numbers have risen past 10k, and there appear to be many sincere people in there who are really angry at Loki and also a little sexually confused by their attraction to him. Might be worth joining just to read those comments.

And in the world of Norse mythology, Loki also transforms all the time. While it’s a fascinating religion, I sincerely doubt that Disney+ is cultivating a whole bunch of new followers for Odin.

“LMAO Disney has been leading the charge? DISNEY?!” wrote Redditor TheAmericanMutt. “You also can’t tell me that ‘against’ isn’t Christian code for ‘cancel.’ I see you and your BS, you hypocrites.”