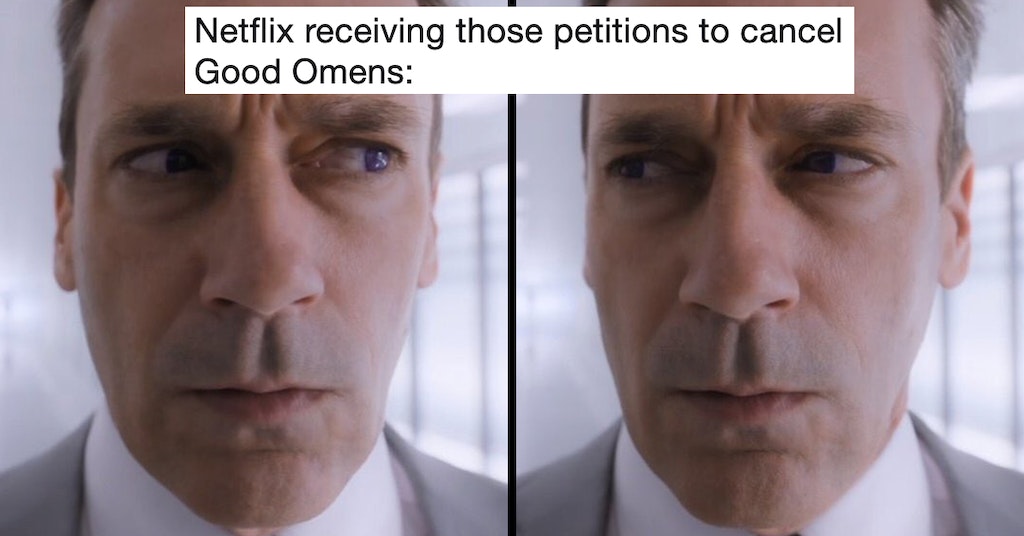 A U.S. Christian group is petitioning Netflix to cancel Good Omens, a miniseries based on a 1990 novel by Terry Pratchett and Neil Gaiman that depicts an angel and a demon teaming up to stop the end of the world. The group, called “Return to Order,” is concerned that the show represents “another step to make satanism appear normal, light and acceptable.”

There are a couple of problems with this. First and foremost, Good Omens was made by Amazon Studios and is only available on Amazon Prime Video, not Netflix. Secondly, Good Omens is a miniseries that is already finished because it’s based on a single book and there are no plans to do anything else with it, so it can’t be canceled.

A Christian group has launched a petition to get @netflix to remove @GoodOmensPrime. Thing is, it's on #AmazonPrime https://t.co/EjWQ9RI52a @neilhimself @michaelsheen @David_Tennant ???? ????

The petition currently appears to either be broken or deleted, though the page URL still refers to asking Netflix to cancel the “blasphemous” show.

Even if Good Omens could be canceled and they had petitioned the right company, the complaints outlined in the letter are all the best parts of the show. “Among their gripes are the fact that ‘an angel and demon are good friends,’ ‘God is voiced by a woman,’ and ‘The Antichrist…is portrayed as a normal kid that has special powers,’” reports IndieWire. Sounds like a great review to me.

Neil Gaiman himself responded to news of the petition by retweeting an image of someone’s notes on the petition and saying that he loves the entire thing.

I love that they are going to write to Netflix to try and get #GoodOmens cancelled. Says it all really. https://t.co/8WNxCY1YmV

Then the official Twitter account for Netflix UK & Ireland announced they “promise not to make any more.”

ok we promise not to make any more https://t.co/TRPux36kcX

Obviously, Neil Gaiman and Netflix’s responses win, but there are plenty of other great ones to cackle at like the Devil worshipper you are.

One day I hope to have 20,000 people sign a petition to have my work removed from a place it already isn't. Until then, I will live vicariously through @neilhimself https://t.co/78aw3mGZLW

Dear Netflix, please can a have a role in next seasons Good Omens? Regards, Gina Bellman (oops) https://t.co/iqFreUgDKz

Glorious. 20,000 people sign a petition calling for Good Omens to be removed from Netflix. Miraculously God has already done it. Don’t tell them She put it on Amazon instead. https://t.co/96PPzDLDxR

CAN YOU GET NETFLIX TO CANCEL GOOD OMENS pic.twitter.com/r5QG8wfAhR

Ahhh, down with this sort of thing.

I just petitioned Pepsi to get rid of Vanilla Diet Coke because that, too, is an abomination. #GoodOmenshttps://t.co/f3KFZS3cAo

If nothing else this is a slightly damning indictment of Amazon's brand recognition. https://t.co/9rJ6JfeeRT

Wait until they find out they've been praying to Spartacus all these years…https://t.co/lyQF630yQj

15. Even Amazon Prime Video U.K. has responded to the controversy, doing so in a, shall we say, devilish manner.

Tell us why #GoodOmens should be cancelled and we promise to send the best reasons to Netflix! ???????? https://t.co/ys5mbUQhMq

Go ahead and “cancel” it just to make sure you don’t get tempted to make an inevitably disappointing sequel, Amazon.