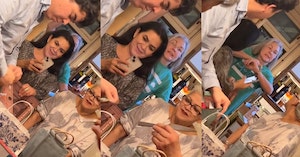 A Christmas party left one family with an unwelcome guest after a neighbor deemed them too loud.

@sweet_shortyyy was recording gifts being opened in the midst of a cheerful gathering when the door swung open in the background. A woman marched right up to the family — inside their apartment — to make a noise complaint.

“Can I ask you guys to tone it down?” she asked, waving her arm around to command attention. “It’s about ten after eleven.”

There are ways to ask your neighbors to keep it down, and there are ways to ensure you never have a good relationship with them. Generally feeling entitled enough to walk right into someone’s home accomplishes the latter.

The woman closest to this Christmas Karen responded appropriately, telling her that she needed to leave immediately.

“This is not your apartment,” she said, moving the woman back towards the door she barged in through.

Complaining about noise during a family holiday party is already lame enough that folks on TikTok likely would have sided against this intrusive Karen, but having the audacity to walk into someone else’s home to make her demands really left no room for debate as to who was in the wrong here.

“KARENING inside someone else’s home I’ve seen it all now,” @keepitreal416 agreed.

Another viewer suggested it’s “time to call the mariachi band, the loudest cousins, fireworks, and some more kids.”

@sweet_shortyyy shared another video that picked off where the first left off, showing those gathered as flabbergasted by the incident as the internet seemed to be.

There’s not really any good way to be a Karen, but if you’re going to ask your neighbors to do you a favor, definitely don’t start by breaking into their home to do so.