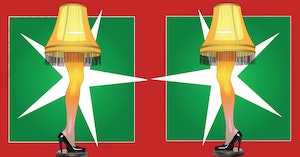 The Christmas season got a little bleaker for fans hanging around outside the iconic house from A Christmas Story as its owner came out and screamed profanities at one of the actors.

A sign out in front of the Cleveland, Ohio, home advertises it as being from the popular film, which received a belated sequel this year. Undoubtedly capitalizing on the renewed attention, the house has been put on the market, after being used for tours since 2006 and as a themed overnight rental as of last month.

Video taken in mid-November showed fans gathered outside of the house to take pictures with actor Yano Anaya, who played Grover Dill in both the original film and its 2022 sequel — only to be interrupted by a furiously screaming Brian Jones, who currently owns the house.

“Yano!” he yelled as he approached the property. “Get the f—k off my house. Now. Get the f—k out of here. I’m not kidding.”

Anaya seemed confused but did as Jones asked, moving away from the group and into the street as the owner continued telling him to “get away” and “don’t ever come here again.”

Jones also called him a scammer, prompting further confusion as Anaya told him he was taking pictures with fans for free.

The owner then accused him of asking for money on some website, and told the other person Anaya was with, “You have no idea what a scammer and what a loser this guy is.”

After one last ignored plea for Jones to talk to him about what was going on so he could understand why he was furious enough to make a whole scene in public, Anaya and Jones both went their separate ways.

It was a jarring video to watch, and undoubtedly an unpleasant experience for the fans who had gathered to get a little nostalgic Christmas joy that day.

Jones later told TMZ that his anger was “out of concern that fans could be misled into contributing to a GoFundMe campaign that will not result in the purchase of the house.”

A GoFundMe was apparently made in conjunction with a group of A Christmas Story cast members who had expressed interest in buying the house, but never went live, as Anaya’s business partner said the group had investors interested in funding the purchase.

After this incident, but before it went viral, the official Facebook page for the house posted that they “are not interested in selling to the cast.” That post appears to have since been deleted.