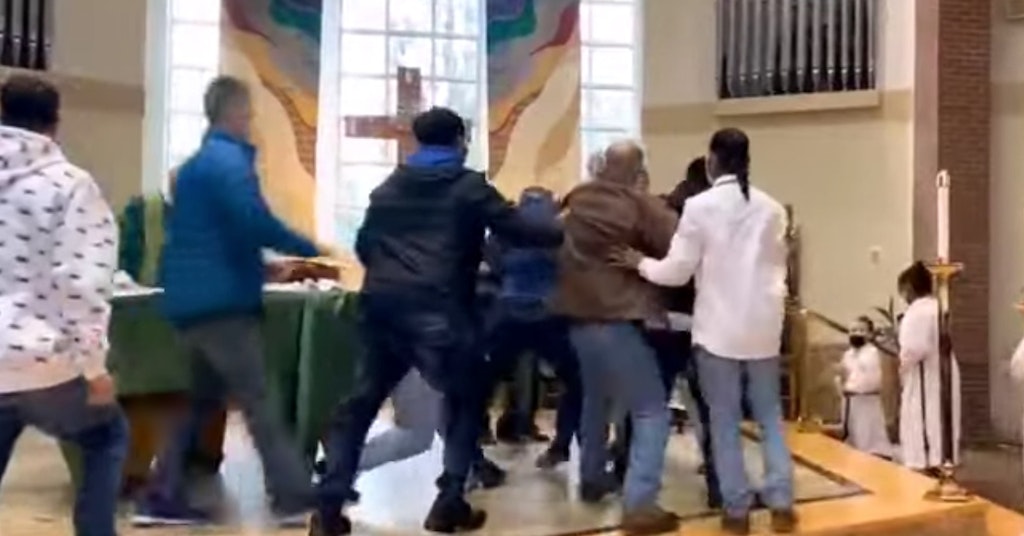 Most people go to church looking for some sort of inner peace, but one man who stopped by St. Frances Cabrini Parish in Lakewood, Washington over the weekend seemed to be looking for a fight — and he got one.

Video shows Father Paul Brunet stopping the church service and addressing a man sitting near the front of the congregation.

“You are in trespass. You need to leave this church right now,” he says. “Would somebody get the security guards?”

Father Brunet then sits down while the man walks up on stage to argue with him face-to-face. But as soon as he gets close enough to the priest, other members of the congregation start to swarm the stage to tell the man to leave.

Things quickly get physical as a struggle ensues. Punches are thrown, the altar trembles, and another 20 or so churchgoers rush up to the stage to try to restrain the man. The whole lot of them are ultimately successful, the priest requests someone call 911, and the group works together to physically drag the man out of the church.

While some people viewing the video initially believed the altercation took place as a response to the man refusing to wear a mask in a city that currently has a mask mandate, this was actually not COVID-related at all.

“The events leading up to this unfortunate incident began last month,” Father Brunet wrote in a letter to the church. “After an initial pastoral appointment with [name redacted], his behavior has worsened and become less predictable. He has engaged in a course of abusive and threatening conduct, directed not just at me but towards the parish and school staff.”

He admitted that the church and related school took out a No Trespass order against the man earlier this month, which is what resulted in his being removed from the church in the video and subsequently arrested.

According to an in-depth look at what happened from Catholic site wherepeteris.com, the man had tried filing a protection order against Father Brunet prior to the No Trespass order out of preemptive fear that his son would be sexually abused and that the priest might “commit a murder-suicide.” The petition was rejected by the court for failing to cite any evidence backing up his claims, and he did not appear to allege any past abuse.

The church has directed congregants not to share the video of the incident but, well, it’s a little too late for that.