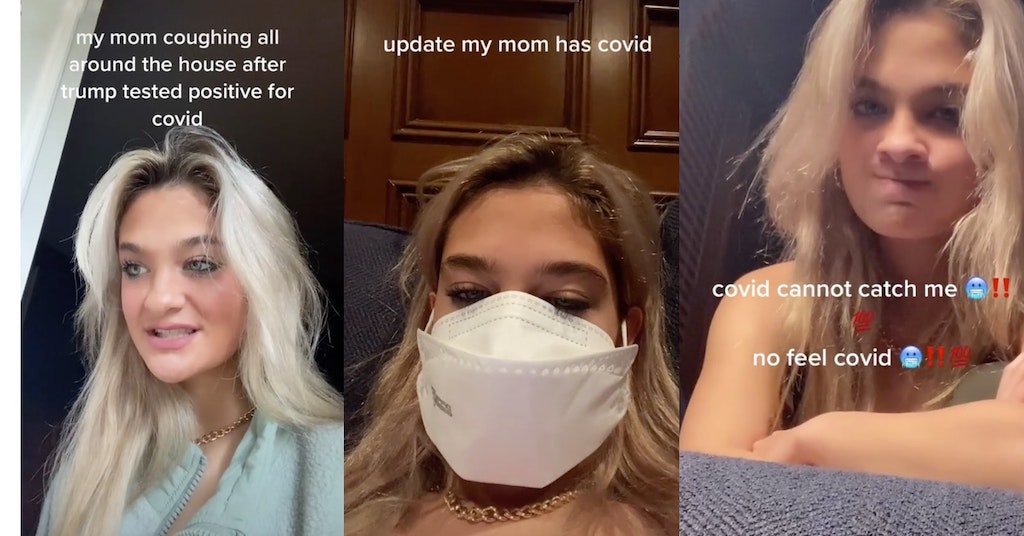 Claudia Conway Reveals Kellyanne Tested Positive For COVID-19 Via TikTok: “She Told Me Not To Post This”

The most jarring thing about President Trump and a number of people associated with administration testing positive for COVID-19 isn’t that they were not, in fact, as mysteriously protected sans masks as they all seemed to think they were, but that absolutely nobody knows if we can actually trust any of the information that’s now coming out of the White House.

Contradictory and suspect information has been flowing from people connected to Trump ever since news broke that he tested positive, if not sooner. But the lack of transparency isn’t limited to just the president’s condition.

Claudia Conway, the 15-year-old daughter of former Trump counselor Kellyanne Conway, announced on TikTok Friday night that Kellyanne not only tested positive for COVID-19, but was trying to keep it a secret.

“Update my mom has covid,” Claudia wrote over a video of her sitting at home wearing a mask.

The teen’s claim quickly circulated on Twitter, as people were already keeping an eye on her TikTok account after she claimed Kellyanne had been “coughing all around the house” earlier in the day, following various people from the Trump camp testing positive.

But another concern came after reading through some of the comments Claudia posted on her own video.

“She told me not to post this but I’m so furious please wear your masks guys,” she wrote.

Another comment claimed that Kellyanne lied to Claudia, and possibly the rest of the family, about the results of her test, exposing her to the virus all day on Friday.

The news was eventually confirmed by Kellyanne on Twitter, undoubtedly as a direct response to Claudia’s video and the attention it subsequently received.

“Tonight I tested positive for COVID-19. My symptoms are mild (light cough) and I’m feeling fine. I have begun a quarantine process in consultation with physicians,” she wrote. “As always, my heart is with everyone affected by this global pandemic.”

It’s already absurd that we have no steadily reliable source of news concerning the health of Trump and key members of his inner circle, but the fact that a teenager with a history of using TikTok to push back against her mother and her political beliefs is a more credible news source than the White House at this point is… well, it’s not that surprising, but in an ideal world it would send a message to leadership that they should do a whole lot better.

But in an ideal world, none of this would be happening at all. So I guess we’re getting our news from TikTok from here on out?