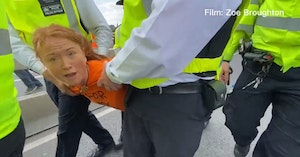 A woman who was protesting against the use of fossil fuels in London last weekend was filmed making a statement on why she was out there as three police officers carried her away, resulting in an incredible interview as she calmly made her case.

The young mom was carried with her face and body toward the ground and her arms handcuffed behind her back, but she didn’t let that stop her from advocating for the future of her child.

“I’m doing this for my son,” she says to a quick-footed journalist. “The government’s inaction on climate change is a death sentence to us all. The United Nations has said we should have no new oil. Liz Truss wants to open 130 new oil licenses. That’s a death sentence to this planet.”

The moment was captured by video journalist Zoe Broughton as police began to mass-arrest protesters who had taken over multiple major bridges in London to bring attention to the threat of a climate apocalypse. They were reportedly led to anti-fossil fuel organizations Just Stop Oil and Extinction Rebellion.

Protests like these have been increasing in frequency around the world as the effects of climate change have begun to show themselves in a brutal fashion, including in the form of Hurricane Ian in the U.S., which obliterated neighborhoods in Florida. The unnamed protester is just one of many thousands of young people fighting for a future for themselves and their children, along with climate scientists so desperate that they’ve started super gluing themselves to government buildings in London.

Unfortunately, a corresponding rise in right-wing extremism around the globe is hampering any efforts to effectively address this extremely deadly problem. This includes the appointment of the new conservative U.K. Prime Minister Liz Truss, who is quickly becoming even more hated than Boris Johnson for her far-right policies.

At the same time, politicians billed as “liberal” have also been issuing new licenses to fossil fuel companies to drill and extract, including our own President Joe Biden.

The vast consensus among climate scientists is that this problem cannot wait, and because we’ve already delayed taking action for so long, only drastic and systemic change now has a chance to stop climate change from killing billions.

“We will continue in civil resistance until this government takes immediate steps to meet our demand to end the cost-of-living and climate crisis by stopping new oil and gas,” said a Just Stop Oil spokesperson. “We need to start a rapid transformation to a fairer society, decided by ordinary people and paid for by those who are profiting from humanity’s destruction.”

Many people who listen to scientists are not only impressed by the unnamed protester’s poise and clarity as she makes a quick statement on behalf of all of humanity, they’re encouraged to see so many young people taking on this issue without fear.