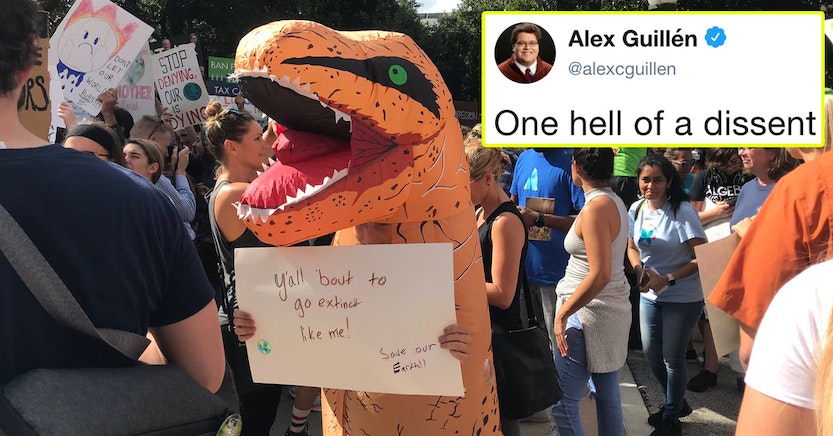 In 2015, a group of 21 kids launched a lawsuit that came to be known as Juliana vs. the United States. It alleged that the country was violating their constitutional rights by continuing to contribute to the climate crisis, despite overwhelming scientific evidence. On Thursday, the U.S. appeals court threw out the case, according to Business Insider, an outcome both the Obama and Trump administration have pushed for.

The response to the case was long, about 32 pages of words from the judges who “reluctantly concluded that the plaintiffs’ case must be made to the political branches or to the electorate at large.”

The suit demanded that the court force the U.S. government to end fossil-fuel subsidies and start to adopt policies that would ultimately reduce greenhouse-gas emissions, instead of continuing to spew them out into the atmosphere. Not a very popular idea amongst industry leaders, who have a number of politicians in their pocket, including our former and current presidents.

Though even the judges who finalized the decision seemed reluctant, they ultimately decided it was beyond the court’s power to compel the government to do anything. Judge Andrew D. Hurwitz wrote that the court could not implement the plans for change outlined in the lawsuit because they would require “a host of complex policy decisions entrusted to the wisdom and discretion of the executive and legislative branches.”

But people are more focused on the dissent from Judge Josephine L. Staton, who objected to the decision.

One hell of a dissent over this kids climate lawsuit getting tossed pic.twitter.com/WHSwGSJUV7

She wrote, “In these proceedings, the government accepts as fact that the United States has reached a tipping point crying out for a concerted response—yet presses ahead toward calamity. It is as if an asteroid were barreling toward Earth and the government decided to shut down our only defenses. Seeking to quash this suit, the government bluntly insists that it has the absolute and unreviewable power to destroy the nation.”

The Juliana decision is a dark moment in history, one which will become darker as those with power to act continue to pass the decision to the next person in line.