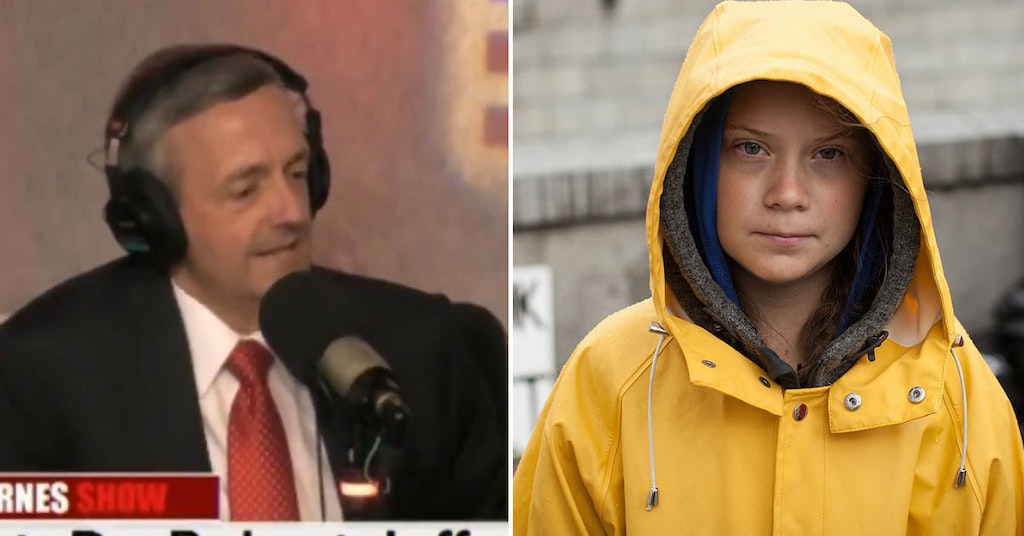 
A video posted this morning by Right Wing Watch shows Senior Baptist Pastor Robert Jeffress on a Fox Nation talk show saying that youth climate activist leader Greta Thunberg needs someone to read the Bible to her and that she should “look at a rainbow” rather than worrying about the extinction of humanity. According to Jeffress, rainbows are “God’s promise” that we don’t have to worry about climate change.

Robert Jeffress says that "somebody needs to read poor Greta [the Bible] and tell her the next time she worries about global warming, just look at a rainbow; that’s God’s promise that the polar ice caps aren’t going to melt and flood the world again.” https://t.co/tLtga3wTSM pic.twitter.com/W89HJlLT14

“This Greta Thunberg, the 16-year-old, she was warning today about the mass extinction of humanity,” said Jeffress, an all-out climate denier. “Somebody needs to read poor Greta Genesis chapter nine and tell her the next time she worries about global warming, just look at a rainbow; that’s God’s promise that the polar ice caps aren’t going to melt and flood the world again.”

Fox Nation’s Todd Starnes agreed, calling the fight for effective action to mitigate the effects of climate change a “global warming, tree-hugging fiasco” and saying that the U.N. “may as well hold a committee hearing on the Tooth Fairy or Bigfoot.”

Before that, they had nothing but praise for Donald Trump’s speech about persecution against Christians, which they believe is totally more real than the Tooth Fairy.

Considering the fact that Greta Thunberg spent much of the past week bluntly rejecting praise and reassuring words that something would be done, it’s doubtful that she would take a story from the Bible as an assurance that the polar ice caps aren’t going to melt. Especially since they’re currently melting right now, sea levels have already risen, and record-breaking floods are already happening.

Other people are certainly not amused by Jeffress’ comments.

Yes, young lady, please read this fairy tale about a vengeful god killing all of humanity to comfort you in the face of overwhelming scientific evidence and observations.

The rainbow is sign of a covenant between God and every living creature. God withholds future flood, gives us every kind of food though no flesh with its blood, and requires on our part no shedding of human blood.

Which one is the child, again?

Those rainbow ain’t working so good in Houston and SE TX. #dipshit

Hope those rainbows are comforting when his Texas megachurch is underwater.