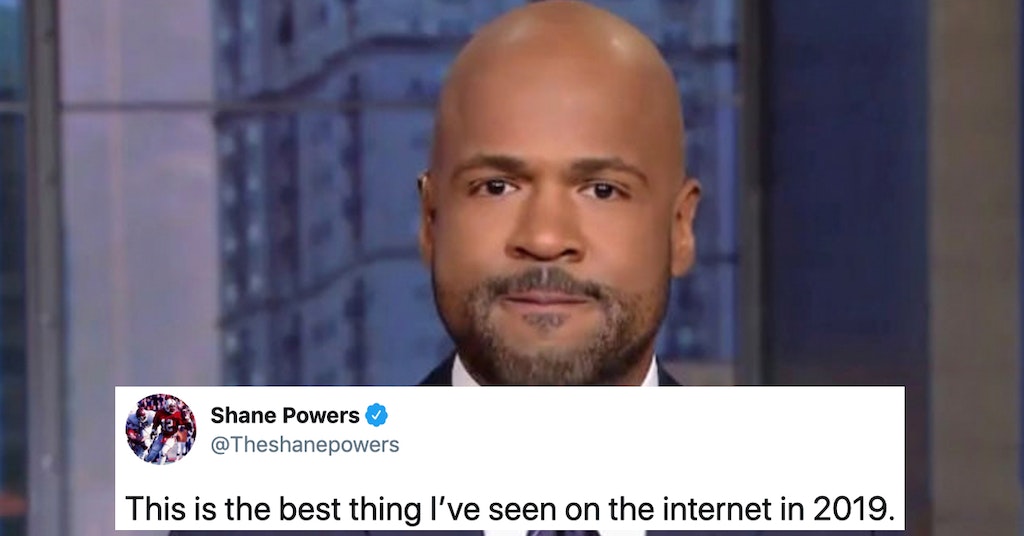 President Trump started his morning with one of his all-too-common Twitter freakouts insulting a congressperson of color—Rep. Elijah Cummings—with racist language.

Rep, Elijah Cummings has been a brutal bully, shouting and screaming at the great men & women of Border Patrol about conditions at the Southern Border, when actually his Baltimore district is FAR WORSE and more dangerous. His district is considered the Worst in the USA……

Why is so much money sent to the Elijah Cummings district when it is considered the worst run and most dangerous anywhere in the United States. No human being would want to live there. Where is all this money going? How much is stolen? Investigate this corrupt mess immediately!

Cummings, a Maryland lawmaker whose majority African-American district includes parts of Baltimore, is also the Chairman of the House Oversight Committee faced with the daunting challenge of keeping Trump’s lawless administration in check.

In that role, Cummings assailed the brutal conditions of Trump’s border detention facilities some are calling “concentration camps” earlier this month. A Fox News segment criticizing Cummings for his comments and the state of his own district appears to be what set Trump off on his racist rant.

Everything Donald Trump knows about Rep. Elijah Cummings and his Baltimore congressional district comes from the Fox & Friends segment he just watched. pic.twitter.com/Fy4RmkD5Pz

As has been pointed out several times in the past, linking minorities to some kind of “infestation” is not only dehumanizing and racist, it’s also the same language Nazis used to describe Jews during the holocaust. Equating “undesirable” people with vermin or disease lays the predicate to eradicate the “pests” or “cure” the “disease.” Obviously, it’s not the kind of language a normal president or politician uses.

Trump’s latest racist tirade against a black lawmaker didn’t sit well with one CNN anchor. Victor Blackwell reported on Trump’s tweet and then sent the president a powerful message about his own personal experience.

Drop everything you're doing and watch this….

“Donald Trump has tweeted more than 43,000 times. He’s insulted thousands of people—many different types of people—but when he tweets about infestation, it’s about black and brown people,” Blackwell began.

Blackwell then gave a brief history of Trump’s tweets linking minorities with “infestation.” Like this one early in his presidency attacking Civil Rights hero John Lewis, who also represents a majority-black district in Georgia.

Congressman John Lewis should finally focus on the burning and crime infested inner-cities of the U.S. I can use all the help I can get!

And this one about sanctuary cities:

There is a Revolution going on in California. Soooo many Sanctuary areas want OUT of this ridiculous, crime infested & breeding concept. Jerry Brown is trying to back out of the National Guard at the Border, but the people of the State are not happy. Want Security & Safety NOW!

And this one during the 2014 Ebola scare:

Why are we sending thousands of ill-trained soldiers into Ebola infested areas of Africa! Bring the plague back to U.S.? Obama is so stupid.

And of course this tirade against Reps. Omar, Tlaib, Ocasio-Cortez, and Pressley:

….and viciously telling the people of the United States, the greatest and most powerful Nation on earth, how our government is to be run. Why don’t they go back and help fix the totally broken and crime infested places from which they came. Then come back and show us how….

That’s when Blackwell started getting choked up, and the anchor paused for a moment before gathering himself to continue, his voice breaking at times, to deliver a powerful and emotional speech.

“The president says about Cummings district that no human would want to live there. You know who did, Mr. President? I did. From the day I was brought home from the hospital to the day I left for college, and a lot of people I care about still do. There are challenges, no doubt, but people are proud of their community. I don’t want to sound self-righteous, but people get up and go to work there, they care for their families there, they love their children who pledge allegiance to the flag just like people who live in districts of congressmen who support you, sir. They are Americans too.”

Blackwell won praise on Twitter for his clear, concise cataloging of Trump’s history of associating minorities with “infestation,” as well as his forceful rebuke:

@VictorBlackwell with the facts, the clear repetition, the slow and definitive read. This was extremely well done. https://t.co/wjSjDnJnbH

If you’re a Trump supporter and not a racist, you should find this upsetting. If it doesn’t upset you, then you’ve just gotta trust us on this one. You’re a racist. https://t.co/FCLNOUbyEd

Even Republicans lauded the CNN anchor for standing up to Trump’s bigotry:

Wow this gives you chills! Everyone should watch this today. https://t.co/9wahGUqv96

Words matter. They tell people how you think and who you are. We know who the president is and we know what the president is, but it’s at least nice to hear it put so clearly and so powerfully. Well done.