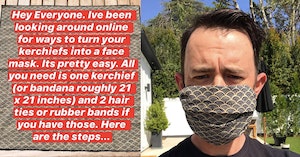 Tom Hanks and Rita Wilson may have been the first big celebrities to come down with COVID-19, but they recovered safely in quarantine and even provided us with some boredom-inspired entertainment on social media in the meantime.

And now, Hanks’ son, Colin, is using his own social media presence to help folks stay safe and avoid catching the virus themselves.

The Center for Disease Control has started recommending that we all wear some sort of protective face covering when we have to leave our houses for essential activities.

But with a significant mask shortage throughout the country, people are turning to less effective but still better-than-nothing DIY options instead — which often means we’re looking up tutorials online. And some of them can get a little complicated.

But Colin Hanks shared a simple but great tutorial on his own Instagram last week.

You start out with a kerchief or bandana and two hair ties or rubber bands — hopefully items most of us already have lying around the house.

First, you lay the kerchief flat and fold over the top.

And fold in again.

Slip the hair ties over the cloth.

And fold the ends inward.

Voila! DIY mask, and you didn’t even have to bust out a sewing machine.

After messing around with his own mask for a few days, Colin had some improvements to add.

The hair ties can become a little painful on your ears, so he suggests either adjusting, or using string instead if you have some on hand.

Of course, if there was ever anyone who was going to bring us an easy tutorial featuring kerchiefs, it would have to be the guy who hilariously started HanksKerchiefs. After all, if you’ve gotta go out in public, you might as well do it safely and stylishly!