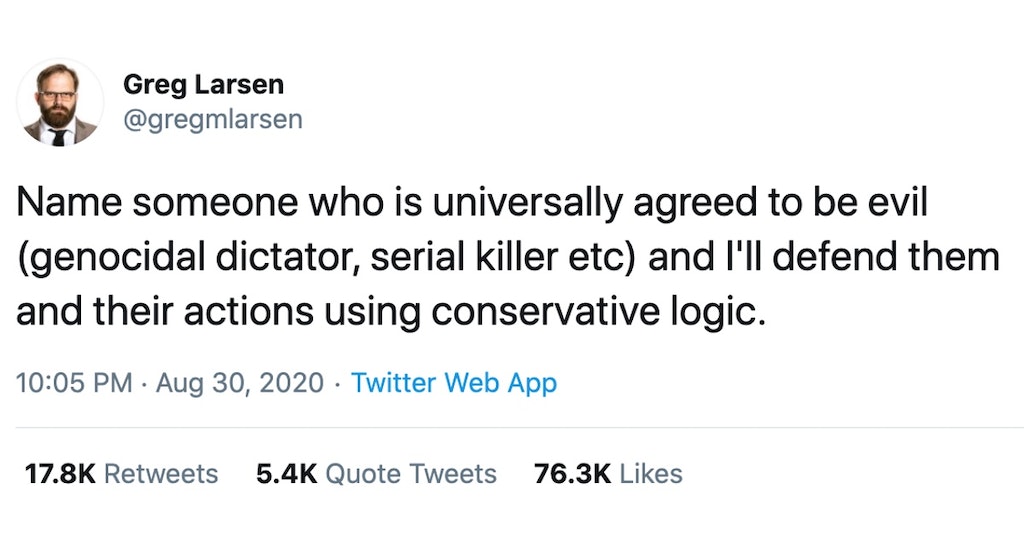 Many conservatives are quick to twist anything around to fit their logic. It often sounds ridiculous to the rest of us, but if you jump through enough hoops, you can make anything sound convincing to people who are already primed to believe everything you say.

Comedian Greg Larsen decided to put this theory to the test, asking people on Twitter to “name someone who is universally agreed to be evil (genocidal dictator, serial killer etc)” so he could “defend them and their actions using conservative logic.”

The results are simultaneously amazing, hilarious, and deeply horrifying. Not only does Larsen do a pitch-perfect impression of far-right commentators in today’s political climate, but he chillingly demonstrates how easy it is for them to focus on the parts they know will cause outrage among their base while leaving out all the parts that matter — aka how and why someone is truly terrible.

It seems likely Larsen’s call for evil to defend was brought on by the right’s current crusade for “justice” for Kyle Rittenhouse, the teenager who was charged with killing two Black Lives Matter protestors and wounding a third in Kenosha, Washington, after crossing state lines with a gun and the desire to “defend” businesses.

High profile Republicans repeatedly claimed Rittenhouse was acting in self-defense, and the media has continually posted pictures of him cleaning up graffiti from the protests prior to allegedly shooting three people.

Even President Trump spouted off what’s become the party line, that Rittenhouse was defending himself from protestors…who were trying to stop him from shooting more people after the first man to die was shot multiple times.

Their defense an accused murderer falls right in line with Larsen’s mockery of their “conservative logic.” And maybe dissecting it and applying it to people who are, as he said, “universally agreed to be evil” will help the rest of us better understand how to push back against their false narratives, and maybe even convince some of their followers that this type of logic just doesn’t cut it when everything is broken down.

So in that spirit, here are some other “defenses” by Larsen: