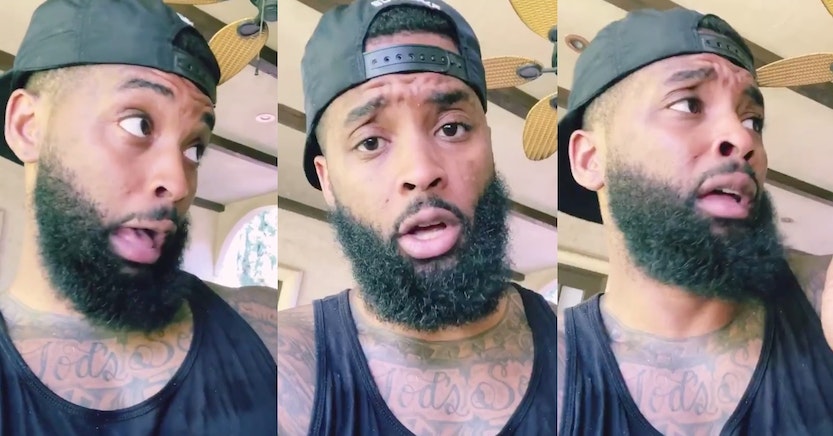 What might be a routine traffic stop for a white person in America can easily turn dangerous or even deadly for a Black person, something we have, unfortunately, seen too many times, especially in recent years.

But Keraun Harris, a Black actor and comedian who lives in Los Angeles, recounted a recent incident where he realized a white woman nearby was recording his interaction with police to make sure he got out of the situation okay.

In a video shared across his social media, Harris says he was pulled over in his own neighborhood for only having temporary plates on a new car he had just purchased. He explained to the cops why he didn’t have a permanent license plate yet and they went to run the number to see if he really was the owner.

“As a Black man, you’re used to that. You’re always guilty until proven innocent, so I’m like, ‘Alright, go ahead and check so I can watch you look dumb as a motherf—ker,” he says.

But as he was waiting, Harris says he noticed another car parked across the street.

“And it’s a white woman in the car. And this white woman has her phone out, recording me and the cops,” he says. “And I’m like, ‘What the hell is this lady doing?’” Harris says she looked “distressed,” and that’s when he realized what was going on.

“And then it hit me,” he recalls. “This lady is recording me because she’s scared something is gonna happen to me, and she’s out here being an ally.”

It’s something the comedian says he had never experienced before, calling it “some crazy sh—t.” The cop took fifteen minutes running his plates, but “this white woman recorded the whole thing.”

When Harris was finally told by police that he could leave, he says he looked over at the woman and she gave him a thumbs-up as if to ask if everything was alright, a gesture he returned.

“And she put her phone down, and she started her car, and she watched me, and she waited for me to pull off, and then she pulled off,” he said. “And I was like, ‘Damn, ally. Ain’t this something? You know, as a Black man, you’re not used to your allies, you know, but we really got allies now, out here recording our traffic stop, making sure we good.”

Many who watched Harris’s video expressed frustration that something like this was even necessary to begin with, but there was also a large outpouring of support.

And a number of white people made a commitment to do something similar if they ever see a Black person getting pulled over by the cops.

At the same time, it’s important not to turn a situation like this into one where white people are applauded as heroes for using privilege the right way — it’s time to quietly do the right thing until one day, hopefully, it just isn’t necessary anymore.