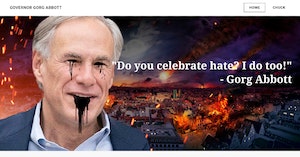 Comedian and writer for such comedy programs as South Park and MADtv Toby Morton announced last week that he purchased the domain name for GovernorGregAbbott.com and has created a website that may surprise those looking for a campaign for the current Texas governor. The site includes a photo of the governor’s face and declares that “Greg Abbott is… The Failure” like it’s a movie trailer. It also includes reviews such as “out of touch” by Morton’s mom and “coward” by “everyone.”

This is not the first time Morton has bought up an obvious domain name for a right-wing politician, and this one appears to be in response to Abbott’s recent and vicious attack on transgender children and their caregivers in the state of Texas.

“Man who attacked trans children and their parents fails to secure his domain name,” Morton wrote. “I got it and will now use it against him. Watch closely, Texas. Click the link.”

The full website is still in development, but the landing page currently lists Abbott accomplishments such as “Attacked Trans Children And Their Parents” and “Ordered Price Gouging During The Winter Freeze To Protect His Donors.”

On the same day, celebrated parody romance novel author Chuck Tingle revealed his own purchase of a domain name that the governor’s office really should have grabbed when they had the chance — GovernorAbbott.com. This one features a parody of Abbott, in classic Tingle fashion, proclaiming “I’m Gorg Abbott, certified devil.”

“Do you like saying you’re for small government then building a hate based platform around exerting power over other people whose lives are none of your business?” the website asks. “I do too!”

“Do you claim to care about your community but waste funds on border wall projects that statistically don’t work and are ethically abhorrent? I do too!”

If you missed it, Abbott signed an order last week directing the state’s Family and Protective Services to investigate anyone caught trying to provide life-saving, gender-affirming care for trans children, declaring this kind of care to be “child abuse” in spite of all the science saying the opposite. Not only does this get in the way of children seeking healthcare to prevent the kind of gender dysphoria linked to high rates of suicide in trans kids, it threatens parents, healthcare workers, teachers, and other people who provide care to children with prosecution and imprisonment.

At just about the same time (what an interesting coincidence), news broke that the former CEO of the Electric Reliability Council of Texas (ERCOT) testified that Abbott ordered the council to keep energy prices set at maximum for days during the deadly Texas winter storm of 2021. This testimony directly contradicts a claim by Abbott’s spokesperson, Mark Miner, that the governor was not “involved in any way” in this decision, which ERCOT claims was made to prevent further blackouts in the state after their power grid failed largely due to a failure to weatherize the natural gas pipes.

The maximum wholesale electricity prices in Texas were kept at $9,000 per megawatt hour, leaving many Texas residents with astronomical bills, as well as a Waco-based electric co-op that had to file for bankruptcy after getting a bill totaling around $1.9 billion. Maxing out the power prices didn’t appear to work to keep the power on, leaving people stranded without electricity in below-freezing weather for days and resulting in the deaths of around 200 people.