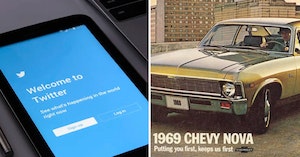 Large corporations are starting to “pause” their advertising on Twitter after Elon Musk tried, backed out, and then was forced to purchase Twitter. Some of the biggest companies to suspend their Twitter ads, either temporarily or not, include Tesla competitors the General Motors Group and Ford Motor. L’Oréal was also rumored to have suspended ads on the platform, but later denied this.

These moves are not surprising after one of the top advertising groups in the world, Interpublic, released a statement to clients recommending that they suspend advertising on the social media giant for at least a week or until Musk clarifies his plans. There have been widespread concerns from individuals and companies alike that the horrific trolling already seen on Twitter will become so much worse under Musk, and people don’t want their brand names associated with that mess.

General Motors put out a statement claiming that their ad pause was business as usual for a period of significant change to a platform they advertise on, though this whole deal feels like anything but “normal” to a lot of folks.

“We are engaging with Twitter to understand the direction of the platform under their new ownership,” a company email said. “As is normal course of business with a significant change in a media platform, we have temporarily paused our paid advertising. Our customer care interactions on Twitter will continue.”

Ford Motor has also suspended their Twitter ads, but did so prior to the closing of the deal between the platform and the apartheid emerald mine heir. After being asked about this, they said that the pause will continue while they “evaluate” the emerging mess Musk is in the process of creating.

“We will continue to evaluate the direction of the platform under the new ownership,” they told CNBC.

After the Financial Times reported that cosmetics giant L’Oréal had also suspended their Twitter ads, the company released a statement denying this, saying they have not yet reached a decision on whether their advertising will remain. If they do decide to pull their ads, this could be a significant blow to the social media site as L’Oréal is one of the top 10 advertisers in the world, spending around $10 billion on this alone in 2021.

There may also be additional companies who have stopped their Twitter advertising without mentioning that they’ve done so, if a remark by an ad executive to the Financial Times is anything to go on.

“There’s some quiet quitting going on,” said the unnamed executive.

Musk has made some rather contradictory statements on the future of Twitter and its moderation policies, which has naturally made many companies who don’t want their products associated with people screaming the n-word a bit nervous. The billionaire has both claimed that previous bans would be reviewed, including the one on Donald Trump, and that policies on allowed speech would be loosened, and said that “brand safety” on the platform would be unchanged.

The surge in hate speech on Twitter has not helped ease their fears, and Musk’s promise to create a “content moderation council” has been met with skepticism. For now, he seems far more concerned about trying to mock and bully people into pay $8 per month for a little virtual blue check mark badge that will immediately mean next to nothing once it becomes available to anyone who can pay.

Musk fans are currently both saying that the General Motors ad pause means nothing and being really salty about it.