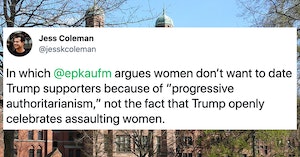 An article for conservative magazine the National Review is going viral in the worst way for arguing that “viewpoint neutrality should be legally mandated” because Trump supporters are having trouble getting dates and that makes them very sad. The article, written by Canadian professor of politics at Birkbeck College and man suspiciously preoccupied with the population levels of white people Eric Kaufmann, argues that “elites” must be shifting leftward because nobody will date Trump fans and this is the same thing as Black people fighting for the right to vote.

“When a sample of nearly 1,500 female Ivy League students was asked whether they would date a Trump supporter, only 6 percent said yes (after excluding the small minority of the sample who support him),” the article literally begins.

Kaufmann cites the Foundation for Individual Rights in Education (FIRE) for this survey—a right-wing organization that caught attention years ago for arguing that colleges banning sexual harassment on campus is a violation of men’s rights.

People with deeply different political views having trouble getting along enough to form a romantic relationship is not a new phenomenon, with very few being able to make it work, and even then the health of such relationships often comes into question. Unfortunately for men like Kaufmann who want to date the Ivy League ladies, a strong educational background tends to clash with Trumpism.

Kaufmann even brings up similar surveys among the general undergrad population, also done by FIRE, that find only seven percent of college women who identify as Democrats will date people who support the man too right-wing for many U.S. Republicans. Somehow this not only surprised him but also inspired him to write up a whole manifesto in three parts arguing that employers should not be allowed to fire people for their political opinions, regardless of how unsafe this might make the workplace for BIPOC and LGBTQ+ folks, among others. And it doesn’t end there.

“This also means that publicly funded organizations would be required to be politically neutral in their communications and operations except on matters directly pertinent to organizational aims. Private organizations should strive as much as possible to follow suit, even as they are free to do as they wish,” says Kaufmann, ignoring his previous point about mandating that private companies be forced to keep bigots on their payroll.

Along with every other person who argues this after discovering that their political views are profoundly unpopular outside of their own social and professional bubbles, Kaufmann fails to explain who would decide what is “politically neutral” and how we would ensure that person was neutral themself. It’s almost as though political neutrality is an imaginary concept dreamed up by those who are convinced that their own views are the correct ones and anything outside of them is a threat that needs to be decried as “extremism.”

The good news is that starting the 3,500-word article with the news that Trump supporters are sad and dateless has resulted in the exact kind of Twitter mockery Kaufmann really should have expected.