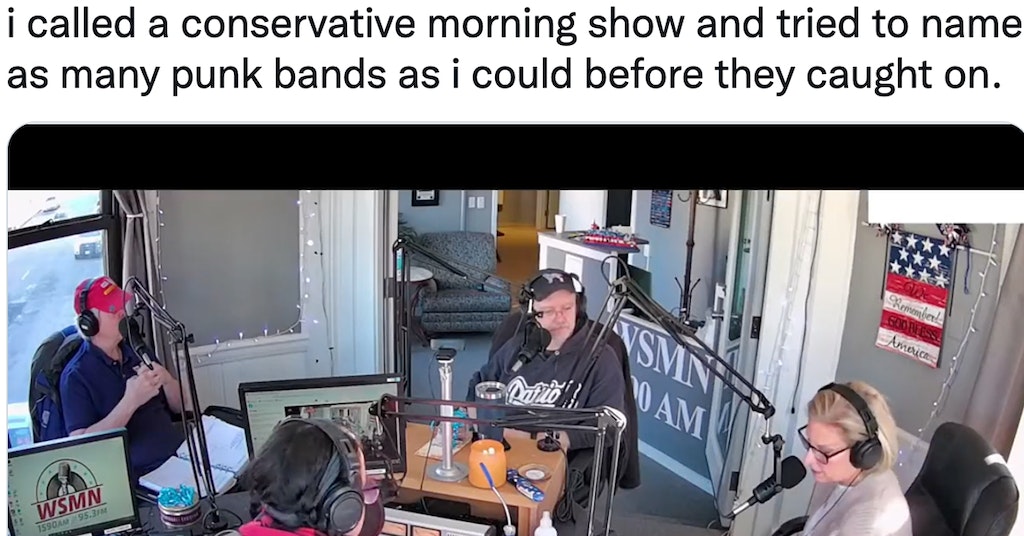 Sometimes it feels like conservatives and liberals live on two different planets, in terms of everything from how they each see the world to their day-to-day lives, including what kind of media they consume.

One man tested that theory on one level at least, deciding to make a prank out of calling into a conservative radio show host and naming a bunch of punk bands, figuring he could get away with it for some time before any of the folks there recognized the names and realized what he was doing.

“You know, I think one of my main problems is, I’m a Republican in a fairly liberal area, and sometimes I feel like everyone is just Against Me,” Rob Dobi began. “So I feel like what we need to do is listen to what our Descendents told us, ‘cause in the past, we Refused to live a Life of Agony.”

He was able to keep up the ruse for some time, hitting some phrases that feel like conservative talking points and rattling off more and more bands, but ultimately saying nothing.

Perhaps the best thing is how the hosts opted to respond seriously to his statements, agreeing that “it always happens.”

“The left takes power, where they overreach, a new group of people rises up, like now it’s parents, mostly,” one man said.

Another contender for best part about the whole thing is how the hosts actually never seemed to catch on at all — not even when Dobi chimed back in saying he was going to go “catch a Reel Big Fish,” or signed off the call with nothing more than “New Found Glory to you guys.”

This is absolutely the kind of prank people can get behind, and many shared their appreciation.

Some even offered up some further suggestions.

It seems totally possible that Dobi could make this a recurring bit. Would any conservative shows ever catch on?