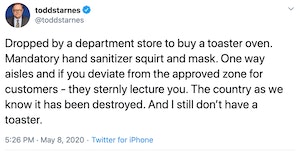 Extreme conservative writer Todd Starnes is someone I had never heard of until today, when he went viral for telling one of the most ridiculous sob stories you ever read in less than 280 characters. The Atlantic reported in 2015 that Starnes was making a name for himself at Fox News, saying his previous greatest hits included writing pieces for the Baptist Press on “the homosexual agenda.”

He was doing pretty well, even hosting a talk show for Fox News radio. Then in 2017, the Wrap reports he was fired for suggesting that American Democrats worship a pagan god named Moloch, who is associated with child sacrifice. Okay, who told?!

In that context, this tweet isn’t a real big deal, but let’s examine it anyway. On Friday, he tweeted:

Dropped by a department store to buy a toaster oven. Mandatory hand sanitizer squirt and mask. One way aisles and if you deviate from the approved zone for customers – they sternly lecture you. The country as we know it has been destroyed. And I still don’t have a toaster.

It’s like the opposite of The Brave Little Toaster, because they all hid from Starnes.

Dropped by a department store to buy a toaster oven. Mandatory hand sanitizer squirt and mask. One way aisles and if you deviate from the approved zone for customers – they sternly lecture you. The country as we know it has been destroyed. And I still don’t have a toaster.

Let me remind you that this is a man who believes that Democrats sacrifice children, yet having to use sanitizer and wear a mask is what made him feel the country has gone down the toilet.

Obviously, I have a lot of follow up questions, like why? And, huh? Couldn’t you order it online? What is wrong with you?

Some of those questions and many comments about Starnes weird story started circulating pretty quick on Twitter in response:

and i did not speak out

because i was not a toaster. pic.twitter.com/Q8H72Nu9xn

.@Toddstarnes, Veterans Day, 2008: Remember those Americans who sacrificed in time of war. @toddstarnes 2020: I want you all to know that I was forced to observe social distancing in a store and they were out of toasters. pic.twitter.com/giZiSa1Fli

Imagine any of these people dealing with any real oppression. pic.twitter.com/41AN1P6SXL

Yet, the spirit apparently never moved him to purchase a toaster oven until in the middle of a pandemic.

Todd is very sad now. About toasters. And freedom. But mostly toasters. https://t.co/P7ENmRy7iA

Pushing 80,000 dead Americans and their grieving families would like to have a word with you about your fucking toaster, you soulless, grievance-addled meat sack. https://t.co/FZHCZWhQps

I don’t understand this story. Does the person want sympathy? Is this his idea of suffering? Seventy thousand Americans have died in a pandemic with no end in sight. Should we chip in and buy him a toaster oven? https://t.co/B3FGdac5dJ

As someone who’s written horror for thirty years, I’m learning so much during this time. I didn’t realize how harrowing having to clean your hands was, or walking in a particular direction.

Also… in a "destroyed" country, the department store would be a pillaged burnt-out husk… not something you can just "drop by" to test out a kitchen appliance.

What a privileged douche you are.

OMG! This made me inhale an almond… I swear!

Sure, he probably already had a toaster.

But perhaps most importantly:

A toaster and a toaster oven are two different things https://t.co/uRJnJTPIrM

Starnes doesn’t seem like the kind of person who will eventually come around and see reason, if even Fox News had to throw him away. I’m only sad for whatever toaster he finally gets his hands on…who knows what he’ll do with it.