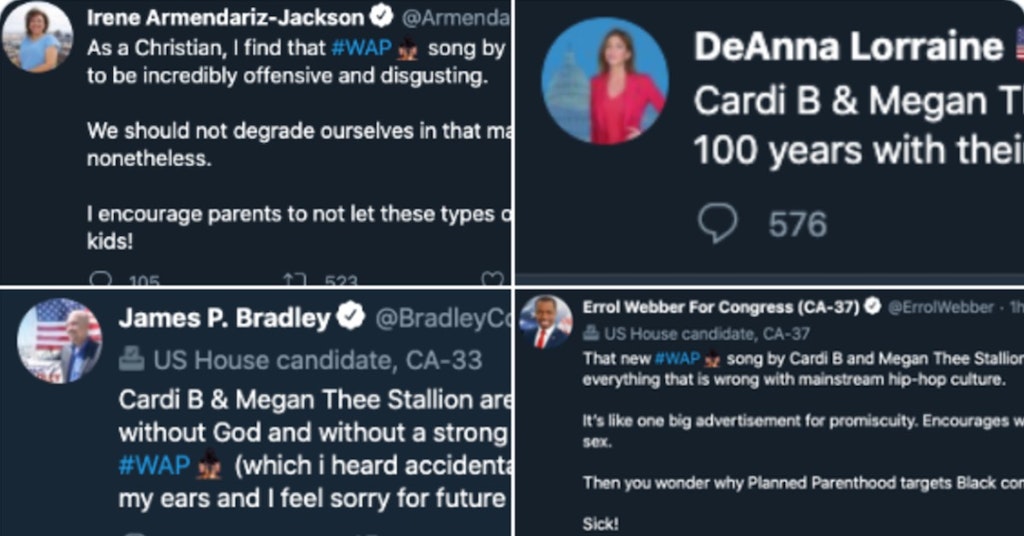 Conservatives who have taken the time to notice the new hit song by artists Cardi B And Megan Thee Stallion, “WAP” (which stands for wet a** p***y), seem to be going into full-blown meltdown mode over a proud display and celebration of women’s sexuality. While others have been calling for Kylie Jenner to be removed from the music video, people like failed Nancy Pelosi challenger DeAnna Lorraine are taking issue with the core of the song.

Of course, women are not to blame for men who reject fatherhood after getting their partners pregnant, and the number of fatherless homes in Black communities has a lot more to do with mass incarceration, but you wouldn’t know that from reading Lorraine’s tweets. She went on to claim that WAP has “set the entire female gender back by 100 years.”

As far as I know, however, I’m still getting paid for writing this article.

Although men of all musical genres have been writing songs about their own sexuality, often using lyrics that actually degrade women, Cardi and Megan’s attempt to reclaim that power for themselves is a step too far for several highly public Republicans.

“Cardi B & Megan Thee Stallion are what happens when children are raised without God and without a strong father figure,” says James P. Bradley, who is running for the seat currently held by popular California Representative Ted Lieu. He also seems to think the best argument for voting against Lieu is that the congressman has shaken hands with a hijabi woman at least once.

Lorraine, meanwhile, went so far as to call for the song to be banned.

But this is also the same woman who literally tweeted a “Sieg Heil” in response to New Jersey Governor Phil Murphy threatening to shut down bars if people won’t follow social distancing rules.

Cardi B has already responded to the controversy and call for a ban on Twitter by making a very Cardi B statement.

While acting like WAP is the thing that’s going to bring an end to the world as we know it (rather than the pandemic or national uprisings or climate change, etc.) seems to be new go-to line for Republicans running for congress, everyone else seems to be rather enjoying the song. Not just for the rhythm or the sick rhymes, either, but for the educational nature of the track.