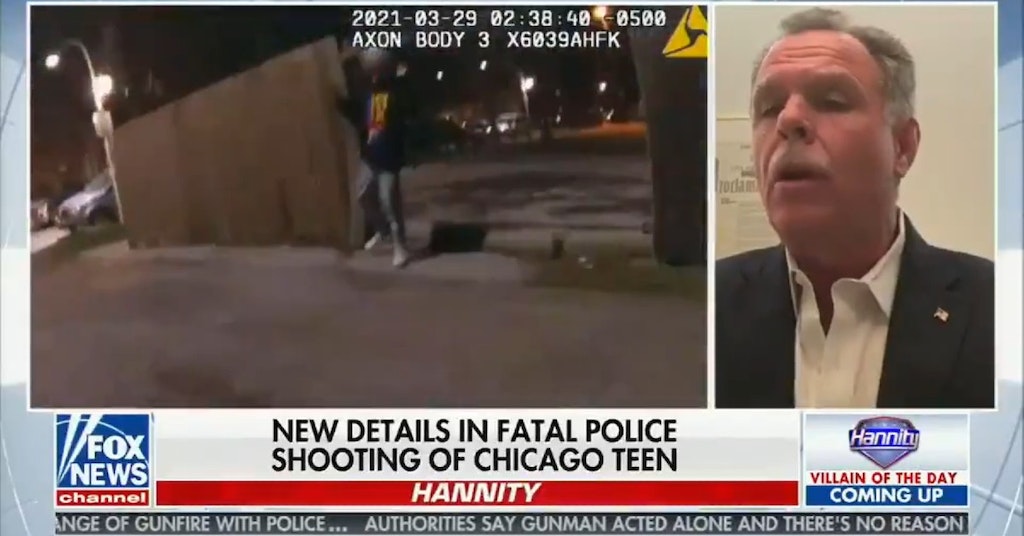 Conservatives are currently hard at work dragging a slain 13-year-old child’s name through the mud, referring to him as “a man,” and doing anything they can to try and justify the police officer’s actions when he shot Adam Toledo after he put his empty hands in the air to surrender.

Fox News in particular has brought on guests who called this killing a “good shooting” and pretending to be baffled that anyone would consider it to be a bad one.

Many are also disgusted with Fox News host Sean Hannity, who referred to Toledo as “a young 13-year-old man” on his radio show.

“We are awaiting the release this hour of Chicago Police bodycam footage that captured the fatal police shooting of a young 13-year-old man by the name of Adam Toledo,” he said.

For those unaware, the technical term for someone under the age of 18 in the U.S. is “child.” People who consider the killing of Toledo to be a “bad shooting” have compared this to how Fox News treated 17-year-old Kyle Rittenhouse, who killed two with an AR-15 during the protests in Kenosha, Wisconsin over the police shooting of Jacob Blake.

Following this, Fox News brought on Republican Pam Bondi, who referred to Rittenhouse as a “kid” and a “little boy.”

Meanwhile, alleged journalist and the man who provided lists of targets to the neo-Nazi network Atomwaffen Division Andy Ngô quite literally attempted to demonize Toledo in a tweet listing his supposed gang names without offering any evidence of his claims.

“Chicago Police have released the body camera footage of the police shooting death of armed teen, Adam Toledo, who was known in gang circles as ‘Lil’ Homicide’ and ‘Bvby Diablo,'” he tweeted

Though police claim a gun was found nearby, some are pointing to reports that cops have been known to carry fake guns to plant on people they might shoot.

Regardless, Toledo’s family has said that even if the child did have a gun before the cop shot him, he dropped it and raised his hands as commanded and was killed anyway.

“It could be a gun. I’m not going to deny that, that it could be a gun, but I can’t tell you with 100% certainty, until I have that video forensically analyzed and enhanced,” said one of the family’s attorneys. “But it is not relevant, because he tossed the gun. If he had a gun, he tossed it.”