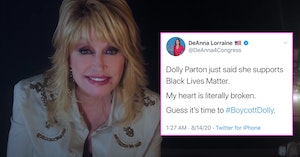 It’s a big deal that Dolly Parton, who has always been quietly thoughtful, kind, and generous and yet has largely stayed out of “politics” in any public way, came out in support of Black Lives Matter recently.

“Everybody needs to express themselves however they feel they have to,” she told Billboard. “I do understand people having to make themselves known and felt and seen. And of course Black lives matter. Do we think our little white asses are the only ones that matter? No!”

The confirmation didn’t surprise most of her fans who have paid attention to who Dolly truly seems to be over the decades, but some conservatives who assume all the good ole Southern folk share their regressive values took issue with the singer’s support.

But perhaps the most amazing thing isn’t the conservatives that are condemning Dolly outright, but rather the ones who are twisting themselves into knots trying to reinterpret her words to mean that she actually DOESN’T support Black Lives Matter.

There are two ways in which they’re doing this.

The first is by taking the iconic country star saying “of course Black lives matter” to mean that she supports the rights of Black people to be alive rather than supporting the “organization” of Black Lives Matter, failing, as usual, to realize that Black Lives Matter is literally just about Black lives mattering and not some high organized terrorist group or whatever Trump and his ilk are trying to claim these days.

The second is that they’re taking the part where Dolly asks “Do we think our little white a**es are the only ones that matter?” and inferring, fairly, that she believes other lives matter beyond just Black lives, but then twisting that to mean she actually supports All Lives Matter.

The best part about this second attempt at reinterpreting Dolly’s support of BLM is that by allowing for the idea that not only white lives matter, with an emphasis on how Black lives DO matter, to be equivalent to “All Lives Matter,” they’re essentially admitting that saying Black lives matter is not in any way a contradiction to other lives mattering, thereby invalidating their entire All Lives Matter movement.

But lest there be any actual confusion over what Dolly believes, the Billboard profile in which she made these statements to begin with — the one written after spending time talking about these things with her — explicitly says that “Parton hasn’t attended any recent marches, but she is unequivocal in her support of protestors and the Black Lives Matter movement.”