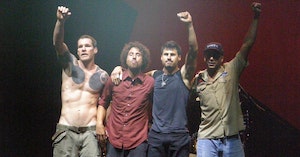 It seems like every day is the day that someone figures out that some bit of media they enjoy has a political message, from Marvel movies containing characters that started out fighting literal Nazis to books that are clear allegories to resistance against authoritative regimes. But it takes a special kind of mental gymnastics to not realize that a band called “Rage Against the Machine” is political.

Yet here we are, in the year 2020, and conservatives on Twitter are getting upset that the creators of “Killing in the Name,” a song about how some police officers are KKK members, suddenly have “political opinions.”

The supposed “fan” who got the most attention for complaining due to the fact that guitarist Tom Morello responded to him has already deleted his account, probably due to the sheer volume of mockery he definitely received. According to the Independent, an individual named Scott Castaneda was unaware that the band was political or that they disbanded in 2000, returning occasionally for reunion tours but not putting out new music. 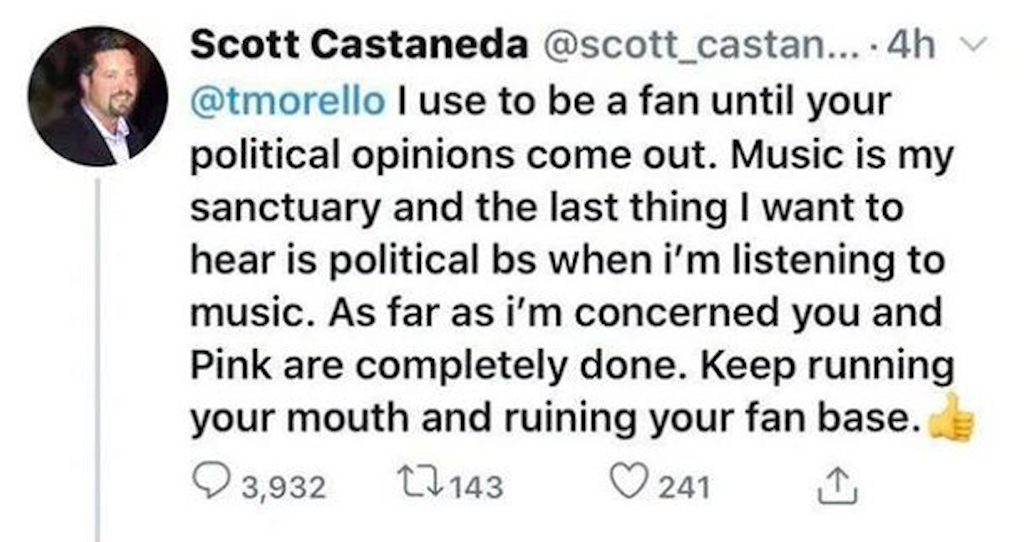 “I use to be a fan until your political opinions come out,” Scott wrote to them. “Music is my sanctuary and the last thing I want to hear is political bs when i’m listening to music.”

Good luck with that.

Morello responded with some well-deserved sarcasm.

Scott!! What music of mine were you a fan of that DIDN’T contain “political BS”? I need to know so I can delete it from the catalog. https://t.co/AMpmjx6540

Morello also responded amazingly to people complaining on his Instagram photo that included a guitar featuring the words “F*** TRUMP” (without asterisks, obviously).

There have reportedly been others like Scott on Twitter complaining way too late about an explicitly political band being political, but if their tweets haven’t already been deleted, they’ve been entirely drowned out by the people making fun of them.

Not that we’re complaining, because the jokes are hilarious.

Racist white dudes suddenly realizing what Rage Against the Machine lyrics are about after decades of listening is the funniest thing since they discovered that Star Wars is anti-Nazi after watching it for 40 years.

The people angrily denouncing Rage Against the Machine for Tom Morello's leftist politics is one of the more hilarious things I have ever seen on the internet. WHAT MACHINE DID YOU THINK THEY HAVE BEEN RAGING AGAINST FOR DECADES? THE ICE CREAM MACHINE? THE ATM? LAWNMOWERS?

American conservatives actually listening to what Rage Against The Machine sing about for the first time. pic.twitter.com/hugmoa1OcX

Racist white guys actually reading Rage Against The Machine lyrics for the first time and realising who Zack de la Rocha is angry at. pic.twitter.com/ktLYhQVjdn

if Rage Against The Machine gets cancelled for being political does that mean we've finally made it to the end of the internet?

Rage Against the Machine? Political? Next you're going to tell me Animal Farm wasn't really written about animals

Wait hold up… Rage Against the Machine are political? pic.twitter.com/HkbMfHDW5X

conservatives who love rage against the machine pic.twitter.com/4U2tLwgLTc

Deciding you're no longer a fan of Rage Against the Machine after 20 years for speaking politics is like being a bird lover all your life then deciding you don't like them anymore because they have feathers.

white conservative dudes listened to rage against the machine and thought "fuck you i won't do what you tell me" was directed at like, their moms or something

Guerilla Radio isn’t a song about monkeys, either.