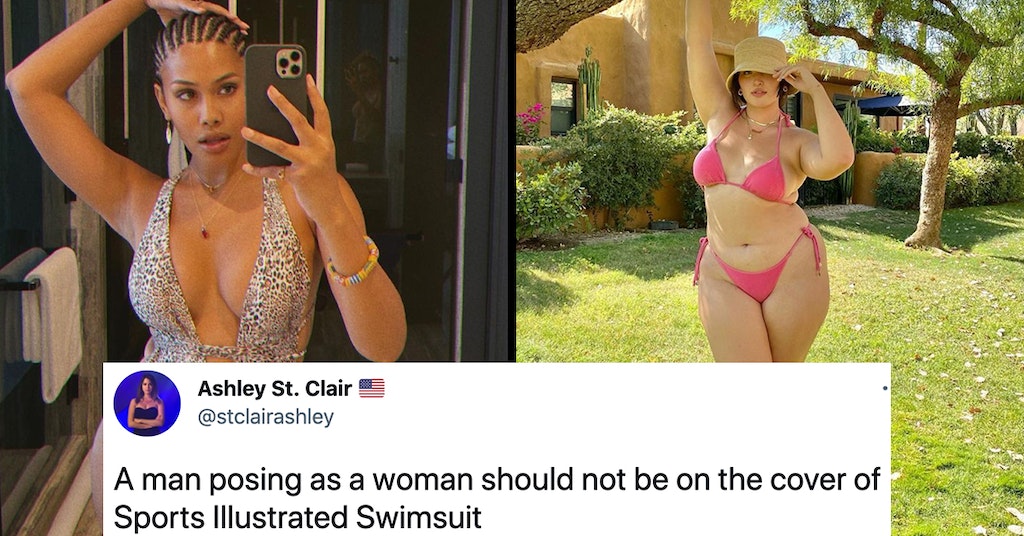 In yet another example of conservatives being frightened by the appearance of any kind of diversity anywhere, right-wing mouth-flappers are currently having all the tantrums over this year’s Sports Illustrated swimsuit issue —a tradition featured on John Oliver’s “How Is This Still A Thing” segment. Women everywhere are already utterly tired of seeing a yearly celebration of mostly unobtainable beauty standards and sexualization of women for the male gaze, but it is at least a bit of an improvement to see less thin women and a gorgeous trans woman in this year’s edition.

Conservative pundits, however, are more upset about this than about the climate crisis melting their infrastructure.

According to right-wing transphobes David Reaboi and Larry O’Connor, the inclusion of the issue’s first trans cover model, the irreplaceable Lenya Bloom, represents a “decline” compared to a 1990s issue featuring a white cisgender woman.

Sports Illustrated Swimsuit Editor-In-Chief MJ Day indicated in a statement that the diversity in the latest issue was not just intention, but a natural and long-running feature of the swimsuit issues of the magazine.

“If there’s one thing that our cover models have in common, it’s that they don’t have one thing in common,” said Day. “They look different, have different upbringings, have different passions and inspirations. But each is a reminder that beauty comes in many forms.”

Another right-wing pundit and veteran of the Rush Limbaugh show took issue with the inclusion of Numi Yu, the first Asian cover model classified as a “plus-size” model but still thin enough to be considered acceptable in a swimsuit magazine at this time, with his fans claiming that because she’s not rail-thin, she must be “unhealthy.”

The idea that any photos of fat people meant to highlight their beauty or otherwise show them in any light other than shame for the state of their bodies is “celebrating the unhealthy” is a pervasive one in the U.S., particularly among the right. However, the very idea that fat bodies are inherently unhealthy is itself not supported by current science, and the idea that existing while fat (or “plus-size” sort of chubby but not really and utterly average for the U.S.) is promoting an unhealthy lifestyle is supported by absolutely nothing.

Furthermore, the promotion of the hyper-thin model of the 90s that was so extreme it was literally linked to heroin abuse was largely blamed for an explosion in eating disorder cases that are far more unhealthy and dangerous than having a bit of extra fat in the hips.

Then there’s Newsmax host Greg Kelly, who apparently lied when he said he was going to stop tweeting for a few months.

Anyway, most of the rest of Twitter is currently celebrating the diversity wins in the latest swimsuit edition, and their positivity and joy over seeing more people represented in popular media is more than enough to drown out the right-wing nerds. Megan Thee Stallion also made history by being the first female rapped on a Sports Illustrated cover.