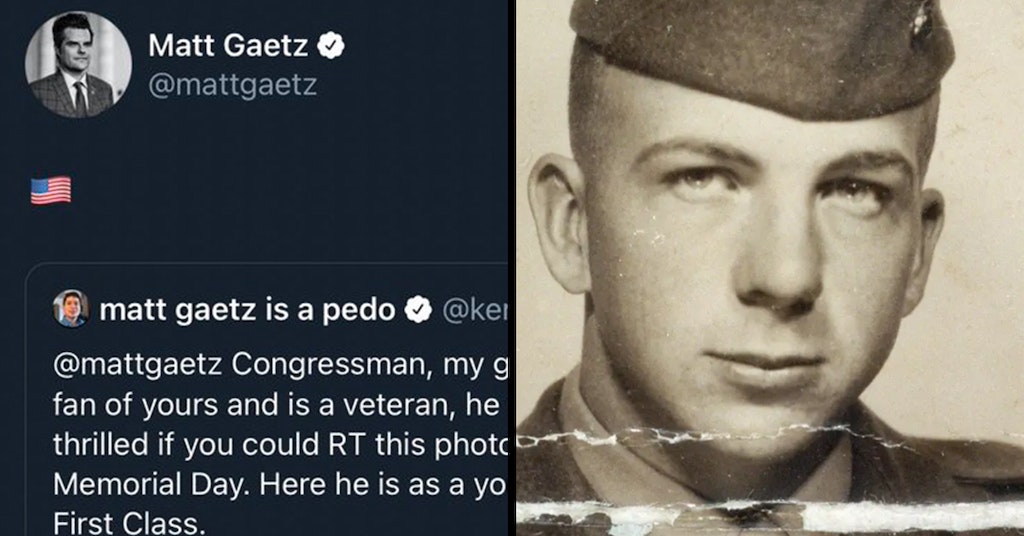 Monday was Memorial Day, a time to honor military veterans who died while serving their country. But for some, it wound up being a day of faux pas, as they accidentally paid tribute to John F. Kennedy’s murderer, Lee Harvey Oswald.

The Intercept reporter Ken Klippenstein got up to his old tricks, messaging prominent conservative figures with a photo of his “grandpa” and asking if they would retweet it to recognize him for his service.

“My grandpa’s a big fan of yours and is a veteran, he would be thrilled if you could RT this photo of him for Memorial Day,” a variation of the tweet read. “Here he is as a young Private First Class.”

Klippenstein does this often, and makes news headlines every time, so it’s a wonder there are still folks who fall for it. And yet they do.

“Wow @kenklippenstein it’s my honor to retweet the photo of a veteran on a day we remember his fallen friends. God bless your grandfather and [American flag emoji],” he wrote.

It’s also worth noting that Klippenstein changed his name to read “matt gaetz is a pedo” after the Florida Congressman, who is under investigation for sex trafficking of a minor, among other things, shared the tweet on his timeline.

Klippenstein’s antics got “Lee Harvey Oswald” trending on Twitter, as people lamented that, yet again, conservatives failed to recognize a photo of a prominent figure in American history.

But perhaps the most outrageous part of it all was when Candace Owens threw herself into the conversation, blasting Klippenstein for “making a mockery of a day that is meant to memorialize men that died so that you and other anti-American leftists can laugh at their sacrifices by photoshopping a murderer into their uniforms.”

One would think people whose lives revolve around politics, America, and specifically how “great” American history supposedly is would know a little bit more about it. But this familiar prank is proving yet again that that would be asking too much of the right’s loudest figures.