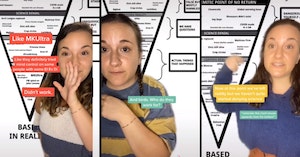 TikTok user and student working on her Master’s in Science on climate change Abbie Richards has been going all kinds of viral for her inverted pyramid chart ranking common conspiracy theories from “based in reality” to not so much. The chart itself proved so popular that Richards, who makes “EcoTok” videos, is working on a series that explains the rankings in her own words.

The results are as hilarious as they are informative.

In her first video, Richards touches on some conspiracies that are known to be real, including COINTELPRO, MKUltra, and various operations by the CIA.

“Last but not least, the Bohemian Club, where all the rich men get together and talk about politics and business and…” Richards takes a moment here to pretend to gag, “golf.”

The next section of the chart, addressed in her second video, lays out conspiracy theories that people have some legitimate questions about but require some speculation in order to fully buy-in to them. This includes theories about various public figures who suffered somewhat mysterious deaths, such as Jeffrey Epstein and Marilyn Monroe, and Area 51. Also, what’s up with birds?

“Who do they work for?” Richards asks.

In section three, we cross the “leaving reality” line and get into some really weird stuff that is pretty much harmless to the general human population. Richards references all the cool stuff humans have made that people like to credit to aliens (“rude”), Elvis still being alive (his family would like you to please stop), and mythical creatures like Bigfoot and LochNess, though she includes a warning about that last one.

“Fair warning: Telling Scottish people that the Loch Ness Monster isn’t real will make them angry which in turn will make their accents even cuter,” she says.

We’re still waiting on parts four and five, where things start to get, as Richards puts it, “kinda scary.” Still, people are enjoying her video series so much that the climate student has had to ask them to be patient with her. If we’re lucky, we’ll get more than two more videos.

In fact, people are loving her videos so much that she’s had a little bit of a problem with fans failing to credit her for her work, reposting her videos and calling her “this person.”

Others, however, are making sure to give Richards credit and even building on her work.