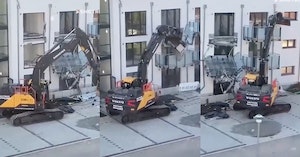 Contractor Wrecks Apartment Complex After Allegedly Not Getting Paid For Work

Every independent contractor knows the frustration of not being paid in a timely manner, but one builder decided to take matters into his own hands in a brand new kind of way.

The contractor hopped into an excavator and started smashing balconies on a newly constructed apartment building in Blumberg, Germany, last week. No one was inside the building at the time, and no injuries have been reported, but the man kept on vandalizing the property until the excavator’s hydraulic hose broke — at which point onlookers say he hopped into his car and drove away.

All said and done, the disgruntled worker managed to cause roughly $600,000 in damage to the building, a relatively small percentage of the $5.8 million he claims the developer owes him for the work he did on it.

Still, the damage was fairly extensive for the short time he was able to spend causing it.

According to The Sun, police were concerned the contractor’s wrecking spree may have damaged gas containers being housed in one part of the building and had to temporarily shut down the area as a precaution.

People online have largely praised the builder’s aggressive response to allegedly not being paid, as frustrations with corporations cutting every corner they can to pad their bottom line are certainly nothing new.

The contractor did eventually turn himself into the police, though clearly a lot of folks don’t think he should be held liable for refusing to let a company profit off of work he did without receiving full payment.

And maybe any companies utilizing contractors will think twice about screwing them over after seeing just how messy that can get — in the construction world, anyway.