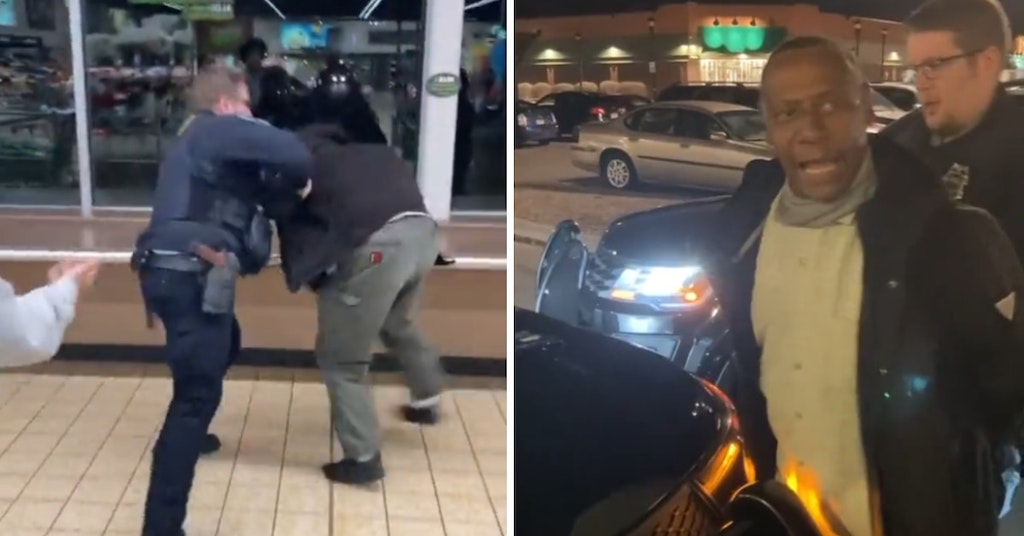 Videos of a 64-year-old Black man being violently manhandled and eventually arrested by a Minneapolis police officer when the man did nothing other than raise his voice in objection to the cop touching him. The man identified himself in a second video of the incident as Troy Lee Billups and commenters have identified the arresting officer as Christopher Lange, who has reportedly been the subject of multiple conduct complaints yet continues to act like this.

Witnesses say that Billups did not touch or in any way threaten Officer Lange before the cop said “you’re out,” grabbed him by the back of his coat, and forcibly wrestled him to the floor as Billups rightly objected and bystanders screamed.

“What are you doing?” the person filming shouts. “You’re suppose to de-escalate, how the f— is this de-escalating, dog?”

The cameraperson demands Lange’s badge number as Billups demands to know what in the world he’s being arrested for, because in the supposedly free nation that we live in, cops are supposed to have a reason for detaining people outside of not being respectful and gentle enough with cops.

Lange can be heard saying something about “obstructing,” a common throw-away excuse for cops to detain people when they really have no reason to do so. During the initial arrest attempt debacle, a Black woman who seems like she may be an employee of the store and looks to be on about two minutes of sleep approaches Lange and speaks softly to him while another bystander films his arrest for nothing at close range.

These bystanders manage to do the job that the police are supposed to be training for with all that money we keep pumping into their budgets, de-escalating Lange until he lets Billups go rather than trying to twist and wrench the arms of a 64-year-old to unlawfully arrest him. What Lange did, as the person filming points out repeatedly, was exactly the opposite of de-escalation.

According to local reports, what may have started the issue was a young shopper accusing Billups of harassing his girlfriend, though nothing beyond that occurred between the two of them. When Lange showed up, witnesses say that the officer kept touching the young man who issued the accusation and he didn’t like it, so Billups spoke up to tell Lange to keep his hands to himself.

“You don’t put your hands on a young kid,” Billups says to Lange after he’s initially let go. “You don’t do that.”

Unfortunately, in spite of heroic de-escalation efforts by random bystanders and an exhausted grocery worker, Lange ends up handcuffing and arresting Billups in the second video, seemingly again entirely based around the officer’s ego.

As Billups and the person filming try to explain that the interaction was calm and under control until Lange showed up and started touching and bullying everybody, he arrests Billups after repeatedly refuting the idea that he’s not allowed to touch people without consent. This apparently rubbed up against his department-issued God complex.

“You cannot put your hands on me,” says Billups.

“No, you can’t, not without just reason,” says Billups, explaining basic law to the law enforcement officer.

“Yes I can,” says Lange again, and demonstrates this by taking out handcuffs and arresting Billups.

The 64-year-old was reportedly booked on charges of “obstructing legal process with force” and released without bail. This is likely due to the fact that he was not utterly compliant with the initial unlawful arrest, as police often charge those they arrest without cause with this as some kind of magical after-the-fact cause as though cops can read minds.

The incident is now being looked into by the Office of Police Conduct Review, which claims to be a neutral agency, however in 2019 only recommended disciplinary action beyond “coaching” or a “letter of reprimand” six times out of 611 total complaints, close to half of which were found to have merit.