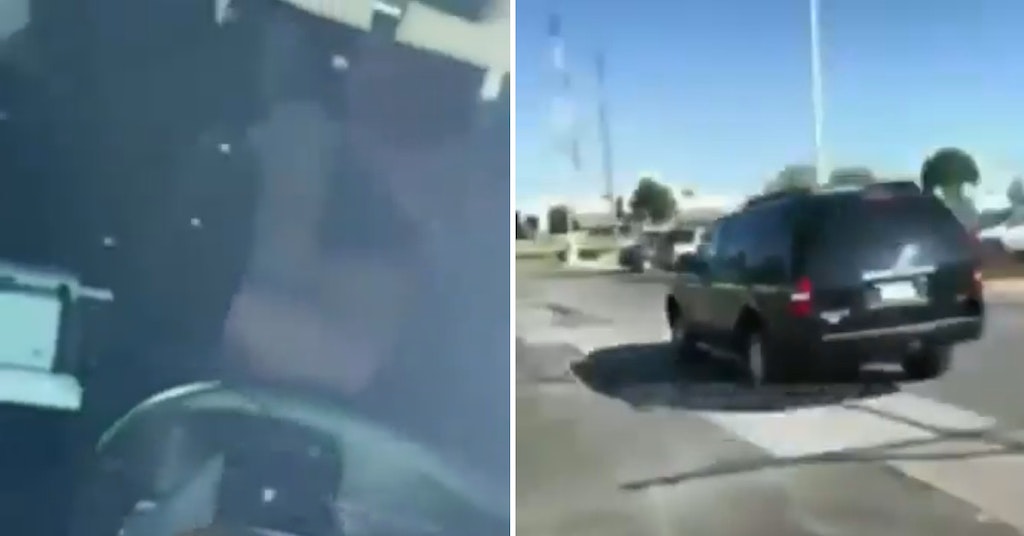 An incredible and thankfully blurry video shows a Wisconsin police officer “engaging in sexual activity,” as the department report is calling it, inside of an unmarked police SUV in the middle of a parking lot and in broad daylight. The Madison Police Department has placed the officer on administrative leave during their investigation into the incident, which was caught on camera by the father of a victim in a recent high-profile shooting in the area that has remained unsolved.

Marcel Scott was simply out running errands when he spotted what was going on in the undercover van and decided after a period of disbelief to expose the officer for engaging in something that is definitely a crime, presumably in the middle of his shift, instead of solving murders.

“My daughter was murdered a year ago in Madison,” said Scott. “It was to basically show people that while these murders and all these unsolved crimes and gun violence and everything is going on that our officers are basically sitting there doing criminal activity.”

Scott’s commentary in the video is rather hilarious, or at least it is if you don’t know about his daughter being murdered.

The identity of the officer’s sexual partner and whether or not she is a full-service sex worker has not been confirmed, but either way, there’s probably a legal issue with a police officer having sex during his shift in a police car in a public place.

It is thankfully impossible to see anything explicit in the video, but a large flesh-colored blob in the backseat certainly suggests that nudity is taking place. A few seconds later, a hand can be seen reaching out toward the window as though trying to block the camera’s view.

“Look, got his pants down. Look at this s–t. Boy, your a– would have locked me up for this s–t,” Scott points out.

Scott threatens multiple times to call the police on this naked police officer, and at one point the back driver’s side door briefly opens before closing again, and the vehicle speeds off, far too late to prevent the act and the vehicle’s license plates from being recorded for the world to see. After posting the video online, Scott recounted his experience to the local news station.

“I saw a, like a detective truck and when as I looked, I saw some white legs go up and I thought I was hallucinating at the time,” he explained. “I looked a little harder in the vehicle, I saw two individuals, a man and a woman, one as a police officer, and they were engaging in sexual activity.”

Scott’s daughter, Anisa, was only 11 years old at the time when she was shot to death by an assailant who shot into the vehicle she was riding in, presumably targeting the driver. Suspects were arrested and charged, and as of August the case against him and his accomplices is still ongoing. The story caught national attention as part of a massive gun violence problem in the U.S. that has not been helped by the continuous pumping of money into police departments.

Anisa herself had prayed in a viral video to be spared from this violence at age seven, expressing a fear of playing outside as so many people were dying on a daily basis, including a little boy who had recently been killed in her area.

“God, I just want to go outside and play like a 7-year-old is supposed to do,” she said, hands clasped together. “I don’t want to die.”