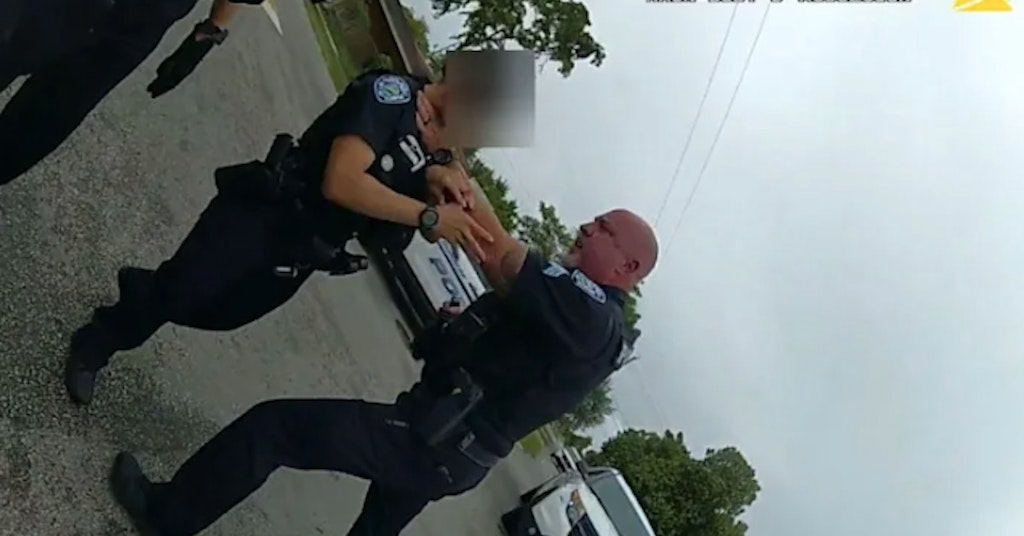 Bodycam footage shows Sunrise police Sgt. Christopher Pullease turning on a fellow officer after they intervened during an arrest where Pullease was threatening a suspect with pepper spray after he’d already been put in the back of a cop car. The Black man had been resisting arrest and more cops were called to the scene, but he eventually gave in and entered the car. That’s where Pullease leaned over him threateningly with the chemical weapon.

The unidentified female office grabs Pullease by the belt to pull him away, and he turns and puts his hand on her neck, then pushes her against another car. He then returns to the suspect, threatens him again, points at the intervening officer, and finally walks away.

“The sergeant approached and engaged in a verbal altercation with the suspect in a manner that I feel was inappropriate and unprofessional,” Sunrise Police Chief Anthony Rosa said in a statement Friday. “This supervisor escalated the encounter instead of de-escalating an emotionally charged situation.”

Of the female officer, Rosa said, “I’m very proud of this police officer. She took some definitive action. I can only imagine what she must be feeling. She’s a newer officer, and he’s a very senior sergeant.”

The 21-year veteran of the force was assigned to desk duty on Nov. 25 while the department launched an internal affairs investigation of the incident. Pullease isn’t currently facing criminal charges, a decision Rosa defended, saying, “So there’s some details of the investigation that I’ve not disclosed, that I’m unable to disclose right now, and if any of the information that comes up during the investigation rises to a level of criminal behavior or criminal conduct, then we’ll address it appropriately.”

Pullease has been accused of excessive force before, and was cleared two other times. We’ll see if he gets off for a third.