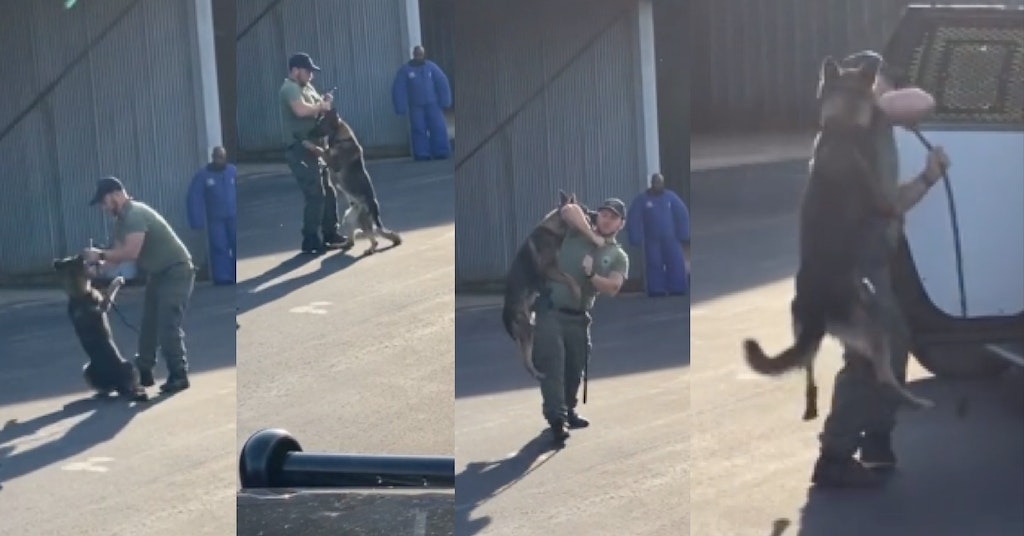 
TikToker @toberlinni posted a video that’s gone viral and disturbed the lives of police officers in Salisbury, North Carolina, who have apparently been abusing not only people, but their own canine coworkers.

The video shows a Salisbury officer violently handling a dog whose body language strongly indicates it’s not the first time.

In the video, the dog jumps out of a car, and when he sees the officer he lays flat on the ground in a position of submission. The cop takes a leash, violently heaves the dog onto his hind legs, and once it is secured, he basically hangs the dog by the leash over his shoulder to carry him back to the car. He has trouble forcing the dog from that position inside, and hits the dog.

It’s unclear if the cop knew he was being filmed, though he certainly knows he’s being watched. At one point, someone can be heard saying, “We’re OK, no witnesses.”

At another point, two voice behind the camera talk about whether or not they’re recording this.

“Is your camera on?” one asks.

“Ah, no, my power’s off,” the other replies, though this footage seems to have come from his camera.

Because we live in a world where people are more compassionate towards animals than people, a whole lot of folks are mad about the video.

Since the TikTok was released, the dog has been identified as a four-year-old German shepherd name Zuul, according to WBTV.

The dog has been taken out of the care of this officer as an investigation is conducted but WBTV shared a statement Salisbury Police Chief Jerry Stoke that implied what’s happening in the video is normal.

“It is important to understand that police K-9s are trained to use force against criminal suspects and the handler must insure that they have complete control over the dog at all times so that any use of the K-9 in the field is appropriate and lawful,” Chief Stokes said.

“When a K-9 is non-compliant with the handler’s commands, the handler is trained to correct the dog. K-9 training tactics and corrective measures can sometimes be alarming when provided out of context. SPD cannot and will not comment on whether the training tactics used in the video were appropriate because it’s still being reviewed.”

PETA released a statement demanding the officer be reassigned from K-9 duty:

And TikTok has kept people updated on the situation:

Zuul is supposedly okay, except for the fact he works for the police department.