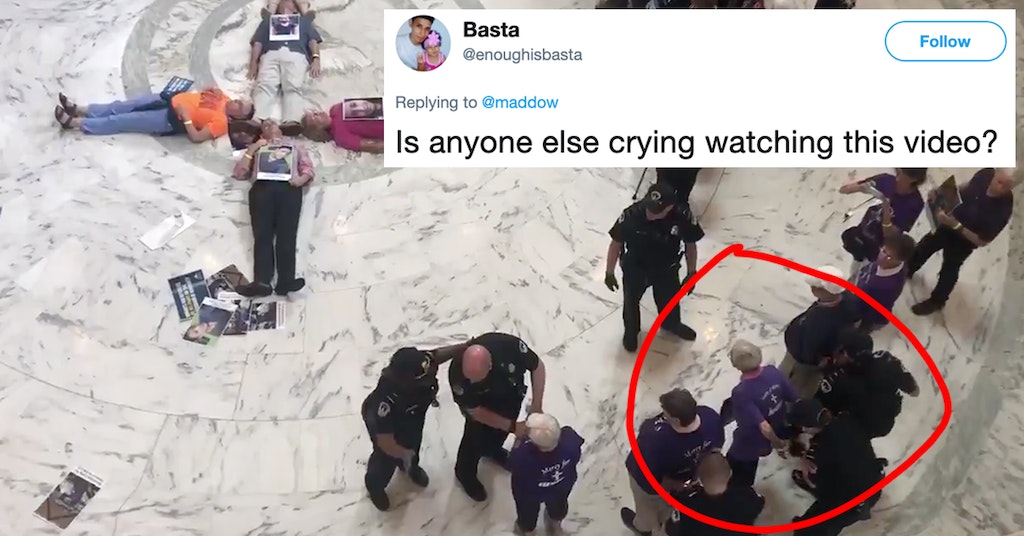 Nothing says “healthy democracy” like the arrest of a 90-year-old nun in the nation’s capital, right? D.C. police arrested the nun along with 69 others for protesting the Trump administration’s treatment of immigrants in the Senate office building.

Catholic Nun led out of Russell Senate Office Building after she was arrested by Capitol Police for protesting the conditions at the U.S. southern border.

A reminder: People who hid jews during the holocaust & freed slaves from slavery were also criminalized.

The protesters, some of whom are part of the Catholic activist group Sisters of Mercy, and charged with “Crowding, Obstructing, or Incommoding,” according to USCP Communications Director Eva Malecki.

Watch here as Sister Pat Murphy, 90, is arrested and led out. Sister Pat works with migrants and refugees in Chicago, and has been holding a weekly vigil outside ICE there for 13 years. She says the treatment of migrants should outrage all people of faith #CatholicDayOfAction #DC pic.twitter.com/z2cXTGcJFn

Protesters in the video are shown standing in a circle around the Senate office building lobby with a few lying on the floor in the center in the shape of a cross, all chanting the Hail Mary prayer as the cops bind their hands with zip tie cuffs and lead a group of them away. The video is from above, but you can see that some of those being arrested have white or gray hair.

ABC News interviewed the 90-year-old, Sister Pat Murphy, who called the current immigration policies and border situation “immoral,” “shameful,” and “a disgrace.” She explained that she “cannot not” work to help the people detained for seeking a better life.

“These are our brothers and sisters and they are part of the human family and how can we not? I mean, any person with any human compassion would reach out,” she said. “What is going on is, it’s just abominable. It’s a horrific situation that’s happening right now.”

“People are being punished because our immigration system is broken, it’s shattered, it doesn’t exist.”

Rachel Maddow boosted the video on her Twitter account, and many people are reacting with support for Sister Murphy and disdain for the way she was treated.

Did they really need to place those zip cuffs on a 90 year old? 🙄

THIRTEEN YEARS?!? I’m thinking that instead of ‘Sister Pat,’ we should call her ‘Saint Pat.’????????#WWJD #WalkTheTalk

Nuns arrested for reciting the Hail Mary prayer to bring attention to human rights abuses against immigrants while supposed Christians scream “send her back” against an immigrant American congresswoman and go on with their daily, racist lives. SMDH

Sister Pat Murphy – who, again, is 90 and spent the day ziptied in the chair in front of me in the custody of US Capitol Police – told me a few minutes ago that I look tired. She sure didn’t! You just can’t keep @SistersofMercy or other women religious down! #CatholicDayOfAction

This is the Catholic Church that I grew up being a proud member of. Jesus would welcome the poor and people in need of asylum. The trump swamp arresting nuns only highlights their amorality #RealChristians

What Cowards! Ignorant, disrespectful cowards! ????????. I am angry to the point of tears..,a 90 yr old woman of God, Arrested, in hand cuffs, for Praying! This is Facism to the limit. Who is next? These sins against women and children are unforgivable!

Is anyone else crying watching this video?

So… no longer the land of the free. Hand cuffing A 90 year old Nun? Really? America is not the country it once was. #Shameful #CatholicDayOfAction

Hitler started by arresting the Catholic nuns and priests, too. @realDonaldTrump is actually following the Mein Kampf Playbook. In sequence. Demonize the other. Arrest those who might help. Brutalize the remaining. Kill the gays and Jews. LITERALLY A STEP BY STEP strategy.

All of this administration & their supporters are such *christians*..they keep saying Christians can stand proud now and can say Merry Christmas..so they arrest Sister Pat Murphy, 90 years old and others she’s with, *protesting* people/children being caged.. REALLY?

This administration would have arrested Mr. Rogers if he had stood up to them.