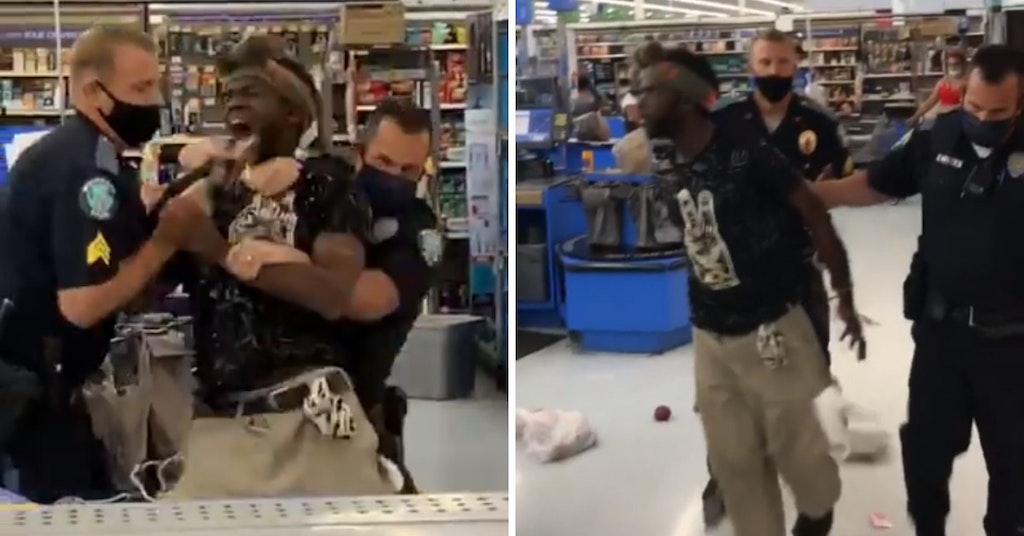 Pennsylvania police were unable to explain why a Black man was tased multiple times and violently detained following his purchase of a bicycle at a local Walmart. According to witnesses, the man had been testing the bike by riding it inside the store, all the while wishing the people around him a good day. Riding the merchandise inside might be against store policy, but many feel that any response from the police was unnecessary, let alone what was done in the video captured by a bystander.

today in walmart (1135 berkshire blvd in Wyomissing, PA) the police unnecessarily used excessive force by tazing a black man who did NOTHING WRONG. (1) pic.twitter.com/MJ7q3vOPu0

In the video, which starts as the arrest is already happening, the man can be heard stating several times that “I didn’t do anything” and “I paid,” offering to show the officers his receipt as they deploy the taser and wrestle him to the ground. They refuse to answer him as he repeatedly asks why they’re arresting him.

The witness states that the Black man was not bothering anybody and was in the process of paying when the police aggression started.

his hand and twisted it as he tried to forcefully arrest him. i couldn't tell you the reason. the man kept asking why he was being arrested and telling the officer to check the receipt to prove he paid for everything at checkout and was clearly unaware of why everything was (3)

She goes on to say that the man was forced out of the store and to a waiting police car, where he again began to protest the violent treatment. In response, the officers tied his feet with a belt. They continued to refuse to state the reason for the arrest even as multiple witnesses asked.

had no idea what was going on. he kept calmly repeating that he did not understand why he was being arrested and harassed the way he was. eventually the officers tied his feet up with a belt and were able to forcefully shove him into their vehicle. officers kept ignoring (5)

Eventually, the only reason given for this violence was “disorderly conduct.” The woman who took the video strongly felt that nothing the Black man did necessitated this kind of brutal response from the police.

(which he wasn't) they should have dealt with the situation more reasonably. they could have made him leave or kicked him out. there was NO NEED TO TACKLE AND TAZE THIS INNOCENT MAN. AS HE WAS LEAVING. it's not even like he was still playing music and riding the bike. (7)

Another witness posted a longer video to Reddit that shows the taser being deployed and the man being taken out of the store.

This is far from the first time that a Black man has faced police brutality after being playful in a Walmart. John Crawford III was shot and killed by officers in 2014 because he was holding a BB gun and allegedly “waving it around” inside the store.

During a time of civil unrest over police brutality that disproportionately targets Black individuals, this video is not sitting well with people, with many pointing out that riding a bike inside a Walmart is a common occurrence and should not be an arrestable offense.

The Wyomissing Police Department investigated themselves in regard to this incident and found that they did nothing wrong.