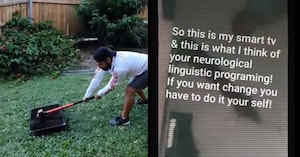 Continuing the American right-wing tradition of engaging in “protest” actions that only hurt themselves, conservatives buying into the conspiracy theories around the coronavirus pandemic are now smashing their own TVs and computer monitors because something something “mainstream media.”

A YouTube video has surfaced of people yelling stuff about fake news before rendering their own property useless in an attempt to own news outlets that they weren’t watching or reading before smashing expensive appliances anyway.

People have begun smashing their televisions to protest mainstream news, which they accuse of trying to “program them” with lies and “fake news” over #COVID19.https://t.co/DjqE43K1XC

“This is a television,” says one woman. “It tells us what to do.” Speak for yourself, lady.

If anything, these videos are an advertisement for how durable some of these TV and computer monitors are as the conspiracy theorists have to put considerable effort into damaging them, and some of them might not even be broken. However, that large smart TV that probably cost a bundle definitely looks like it’s not going to work anymore thanks to the “this is what I think of your neurological linguistic programing [sic]” woman.

But at least she’s more impressive than the lady tearing up a newspaper. Or the guy who tries to burn a newspaper but can’t get his lighter to work. Our favorite, however, is the person using a smartphone to film another guy smashing another smartphone, but they can’t find it after it hits the floor.

Many of these individuals seem to be from Australia, which just shows that the “fake news” line has spread out from the U.S. kind of like, you know, a virus. Of course, conspiracy theories are not a uniquely American phenomenon, and they tend to gain steam any time there is social and political upheaval. One man in the video even referenced a centuries-old conspiracy theory in his halting, confusing message to the media.

“This is what I think of your Freemason, your COVID-19 bulls*** propaganda on all your media outlets,” he says before taking a sledgehammer to his TV.

This is likely the most expensive self-destructive right-wing protest since people started destroying their own Nike gear in order to “protest” the company’s deal with Colin Kaepernick. At some point the jokes about these people are going to get old, but not today.

I have so much commitment to this propaganda stunt that I’ve dragged my 23″ tv from the spare room to tenderise with this kitchen mallet.

I think some of them are disappointed the tv doesn’t go bang or pop somehow when they whack them. Another lie from the media. pic.twitter.com/fsv6Ivbuaj

How do they expect us to watch this? On our lie machines?

Yes, poor Freemasons. They used to be THE go to global conspiracy organisation. Now they are just 'meh!'.

So…”mainstream media” are liars, all of them, but some guy on youtube is the one to trust?