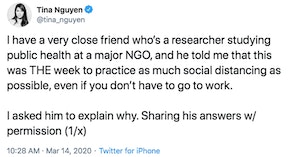 As difficult as it’s been to get accurate information about the spread of COVID-19 from the American government, doctors and scientists and people in the know have been doing their best to share helpful information on social media.

Politico reporter Tina Nguyen took to Twitter last week to share some of the information her friend, who she describes as “a researcher studying public health at a major NGO,” told her about how important social distancing is.

Nguyen’s friend said this week is the key week to practice social distancing.

“[This week] has the highest number of contagious unidentified people and non-infected vulnerable people in the general population, at 2-3 contacts away from you,” he wrote in a text shared by Nguyen.

“So it’s very easy to be the link between someone’s boss and someone’s Grandma right now even if you only interact with young and healthy adults. In a week you’ll know who to avoid cause people will say oh this person I work with got sick.”

This goes back to the startlingly long incubation period for coronavirus, which means a person can be contagious for up to two weeks before showing symptoms.

“So for the people who go out this week and pick up the virus, what’s the timeline for them getting sick? Two weeks from now?” Nguyen asked.

Her friend confirmed, about ten days, and added a chilling claim: “The people they get sick are the ones who will die. In 20 days. That’s the wave that overwhelms hospital capacity.”

As self-isolation just isn’t possible for everyone, Nguyen’s friend advocates social distancing as much as you can.

And then he sent me this link, which I found SUPER helpful and I am practicing like crazy right now (5/x) https://t.co/NliatpcxcZ

But if you are self-isolating, in two weeks, you’ll be able to make some positive changes.

While going out in public and large crowds will still be a bad idea, Nguyen’s friend says that in two weeks, we’ll all know which friends and family have also isolated for two weeks, and therefore aren’t carrying coronavirus. At that point, you can choose to go into quarantine together, or carefully interact in controlled groups. 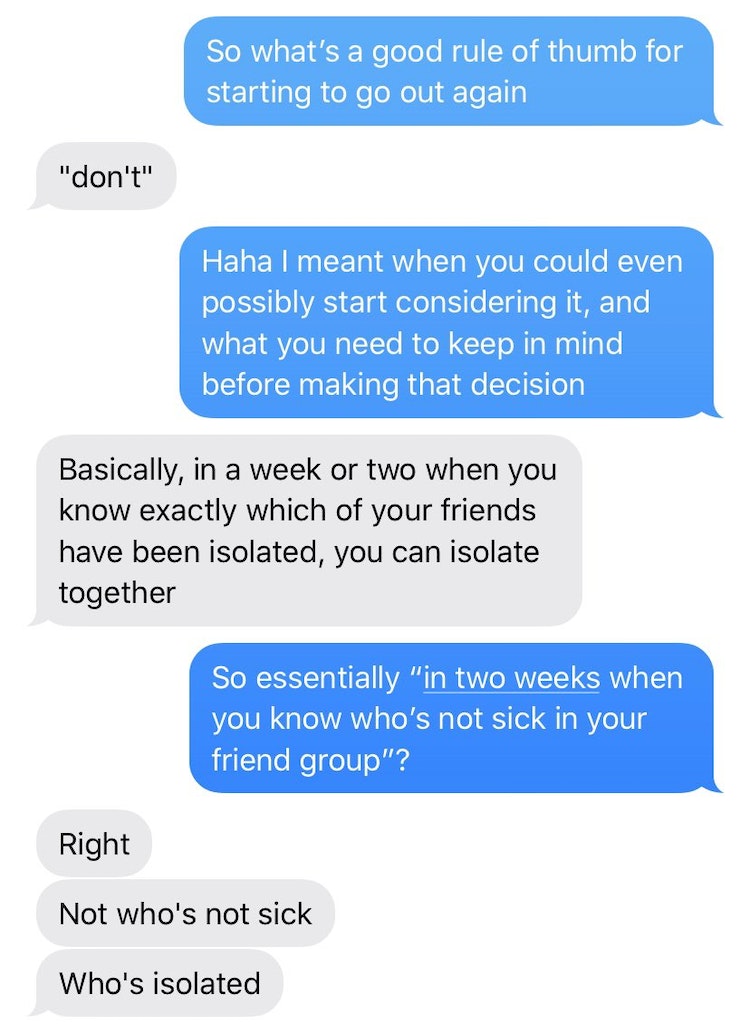 “But obviously it has to stay like exclusive, people really can’t be breaking the group by going into other situations,” he said.

He also has some ideas for keeping entertained during quarantine. 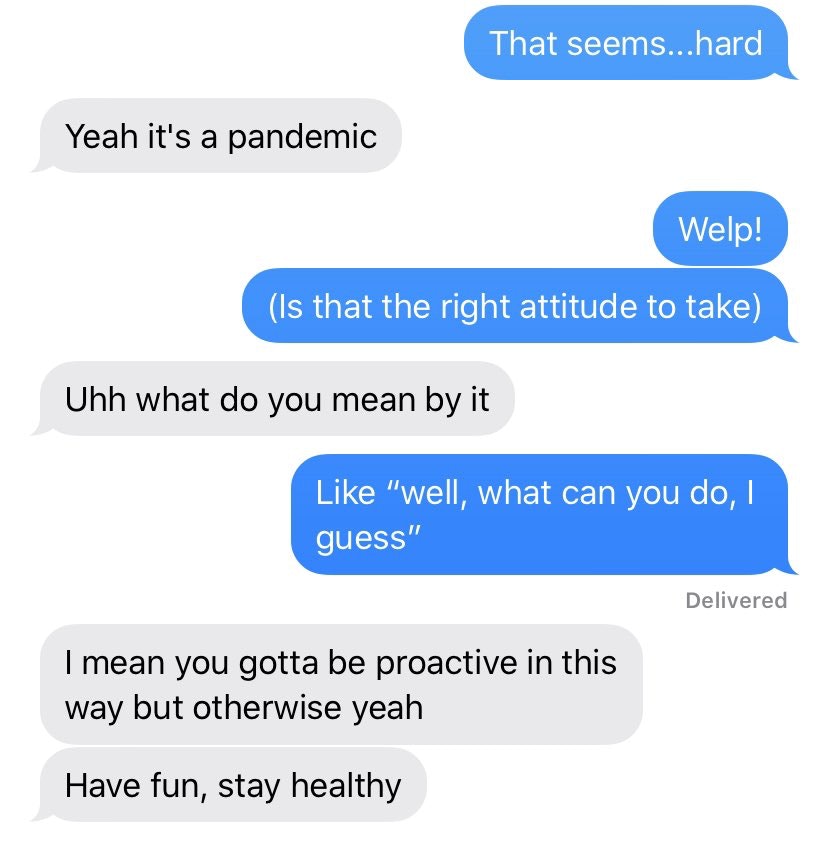 Nguyen’s friend’s suggestions aren’t a perfect system, particularly since the United States is still shockingly behind on testing people for coronavirus.

But, he says, at least after two weeks, we’ll be able to see which people around us are getting sick, and we’ll know who has kept to themselves for two weeks and stayed symptom-free.

“Which is to say that isolating yourself now means you can maybe start seeing friends in a week, and every day you or your friends wait delays that possibility.”

(14/x) Apparently this thread is blowing up, so he's urging everyone to read this article from Harvard University's Asaf Bitton that goes even more in depth than these screenshots can.

It may seem incredibly inconvenient and somewhat miserable now, but it will be worth it if we can all do our part to stop the spread of this disease—sooner rather than later.