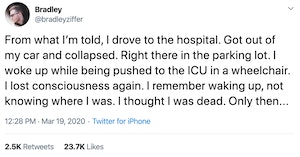 It’s hard to know what to expect if you come down with COVID-19, both because the symptoms can be anywhere from incredibly mild to life-threatening and because while there are similarities between cases, there doesn’t seem to be a completely standard experience in regards to symptoms. Without more information from scientists and doctors who are still rushing to figure this disease out, we’re instead left poring over firsthand accounts from those who have contracted the novel coronavirus.

Product designer Bradley Ziffer is one of the latest to open up about his experience, through a series of tweets posted after he tested positive for COVID-19 and was also diagnosed with pneumonia.

“Never in my life have I been this ill,” he wrote. “‘Young people aren’t at risk, they’ll only have mild symptoms.’ Wrong.”

Ziffer’s symptoms started out fairly mild, before progressing into something worse.

Ten days ago, he says, he was tired and had a headache, so he took ibuprofen (which some have suggested isn’t a good idea with COVID-19, but the World Health Organization says there’s no evidence it worsens the disease).

“Two days later I had a fever and was finding it hard to breathe. A day after that I had a persistent pain in my chest, below my heart. It was hard to speak without feeling tired,” he explained.

Like many others, he found it essentially impossible to get tested or even see a doctor.

Ziffer said his doctor didn’t want to see him because they were worried it might be coronavirus, and advised him to call the health department. After some difficulty there as well, he was eventually told to stay home and “fight through it.”

But Ziffer’s condition worsened, and he somehow wound up in the hospital.

After his fever spiked, he called the ER but was told to stay away.

“Morning came and my fever reached 104°. I was seeing things, hearing things, and I was losing hope,” he wrote. “I felt helpless. I remember calling the doctor that afternoon. The rest is a blur.”

He says he was told he drove to the hospital, only to collapse in the parking lot.

“I thought I was dead,” he admitted.

Finally, he was given a test for COVID-19.

“I tested positive. I was also diagnosed with pneumonia and prescribed antibiotics.”

But, Ziffler said, it never should have taken that long.

Being denied help by doctors, hospitals, and even the health department and having to find a way to literally drop unconscious at their door in order to receive the care he needed was a traumatizing experience that should never happen to anyone.

“Why did it take that, for me to get help?” he demanded. “What if I was old? Or immune-compromised?

“The government has failed us. I’m lucky, others won’t be.”

“Stay inside, be smart,” he wrote. “No death is worth you being ignorant.”