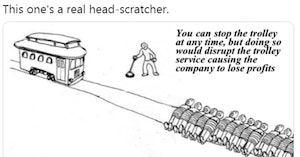 Many corporations are really hurting right now as people stay home, shops shut down, and normal life comes to a halt due to the spread of the novel coronavirus. However, people are finding a limited supply of sympathy for them, wondering why they spent their money on things like stock buybacks instead of saving up for a rainy day like they tend to admonish their lowest-paid workers to do.

It doesn’t help that some of these corporations are refusing to shut down shops and warehouses when they should, failing to implement appropriate sanitation protocols, and relying on their lowest-paid workers to keep things running under risk without giving them paid sick leave or hazard pay. This has resulted in multiple national strikes within companies like Amazon and Instacart.

Not to mention certain companies that have been nickel-and-diming their customers at every opportunity while making their planes increasingly uncomfortable and now suddenly they want us to bail them out. Many colleges and universities are also included, because they pretty much act like heartless corporations when it comes to their money.

If you’ve had it with corporate whining while actual human beings are dying, these tweets are for you:

Legally speaking, a corporation is a person. So any #CorporateBailout should be limited to $1200

Are you guys still all in for this?

too bad they don't have any empty hotel rooms nearby… ????

This one's a real head-scratcher. pic.twitter.com/f0mUAvCk1K

I think this needs to be expressly said:

Do NOT return to work even if you don’t feel sick.

Do NOT end social distancing even if you can’t stand it anymore.

Do NOT die on behalf of capitalism.

As a former secretary of labor, I can tell you that the airlines don't deserve a $50 billion bailout.⁰ In the last 10 years, they spent 96% of their cash flow to buy back shares of their own stock in order to boost executive bonuses.

They shouldn't see a dime of taxpayer money.

Airlines: $35 to put your bag on our plane

Airlines: $16 for bag of chips

Airlines: haha, you have to fork over an extra $50 to choose the seat you already paid for

Airlines: Oh no someone help us we r out of monies

If your job is so "essential" that you can't get off for a killer global pandemic, you deserve $15 an hour and a union.

Funny how all of these ‘low-skilled’ jobs (cleaners, delivery drivers, retail assistants) that so many look down upon are now on the frontline holding society together whilst we work from home.

Those jobs aren’t low-skilled, they’re essential and they should be paid as such.

Maybe we should announce a bailout of the airlines and then keep delaying it until finally we cancel and give them hotel vouchers.

The man who owns this company makes nine million dollars an hour https://t.co/vcKxeGIkjE

Amazon — the richest corporation in the world, which paid almost no taxes last year — is offering UNPAID time off for workers who are sick and just 2 weeks paid leave for workers who test positive for the virus. Meanwhile, it demands mandatory overtime.

Harvard has a 40.9 BILLION dollar endowment—the largest in America

Even ISIS is telling their employees to work from home but your employer is telling you to come in? Damn https://t.co/c0yCUyLEpi

All the major cruise lines are asking for bailouts from the U.S. Government.