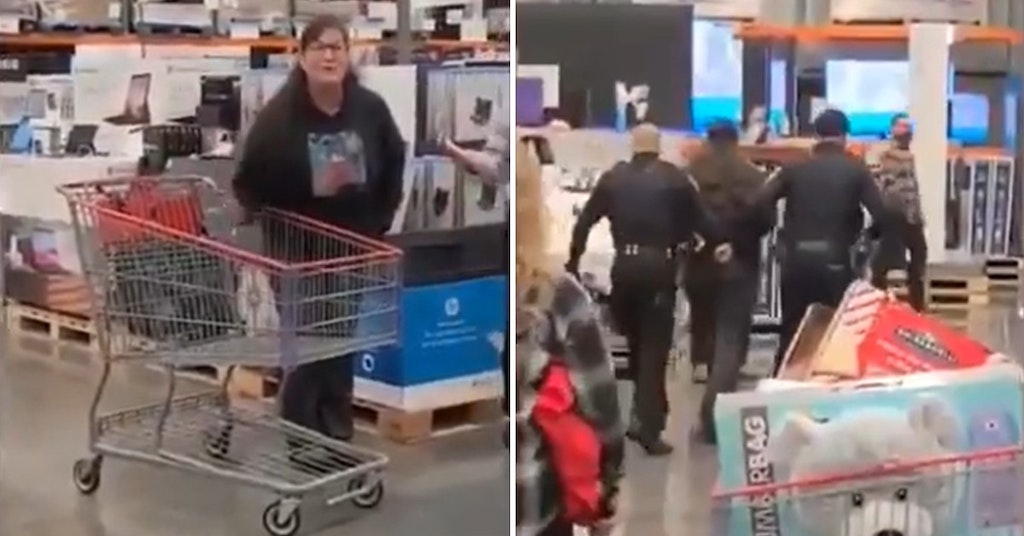 
An anti-mask woman was arrested after making a scene in a Eureka, California Costco and refusing to wear a mask. All Costco stores have maintained mask requirements since the early days of the pandemic reaching the U.S., and have had to deal with people like this on a nearly daily basis across their many locations.

As tired as people are of anti-maskers, they're finding the ending of this particular video, where the woman is taken away by police, to be rather satisfying.

The video begins with two woman chanting "no shirt, no shoes, no mask no service" at the unmasked woman.

“There’s no reason why I shouldn’t be able to shop without a mask on,” the anti-masker replies.

"Haven't you heard about the virus?" one of the women behind the camera asks.

"The masks don’t work!" says the anti-masker. "This has going been on for almost a year now! If they work so well, why are people still getting sick? Can you answer that question?”

As a matter of fact, the masked women could answer that question. "I wonder, stupid. Because they don’t wear their masks."

The anti-mask lady went on to act like she was the only person in the entire country who was refusing to wear a mask and refusing to acknowledge that the pandemic is still a problem because of an entire "movement" of anti-maskers. After calling her a "dumba--," the video cuts to the woman being removed from the store in handcuffs as everyone else jokes and laughs about it.

The video ends with a shot of the anti-masker in the parking lot, still in handcuffs.

According to local news media, the woman's refusal to wear a mask wasn't the only reason she was taken out by the cops. She also reportedly "strong-armed" another woman's phone out of her hands, only returning it when she found out that the police had been called on her.

The woman who recorded the video, which has now gone viral on Reddit's "Public Freakout" forum, was upset at the anti-masker because she was taking care of a man who was at high risk from other health issues.

"I had somebody with me in line who I had just taken up to the surgeon," she told ABC affiliate KRCR. "He’s had heart surgery, he’s had a stroke, and that was my main concern. There were a lot of elderly people there."

After nine months of pandemic, she, along with millions of other Americans, is fed up with anti-masker antics.

"I just don’t get it. I tried to be nice, I didn’t want to yell at her, but I had enough. I had to say something. I was so relieved to see the police come to take her away."

According to KRCR, Eureka police said they put her in handcuffs because she was suspected of robbery. However, they also made sure to include a citation for failure to comply with the local mask mandate.