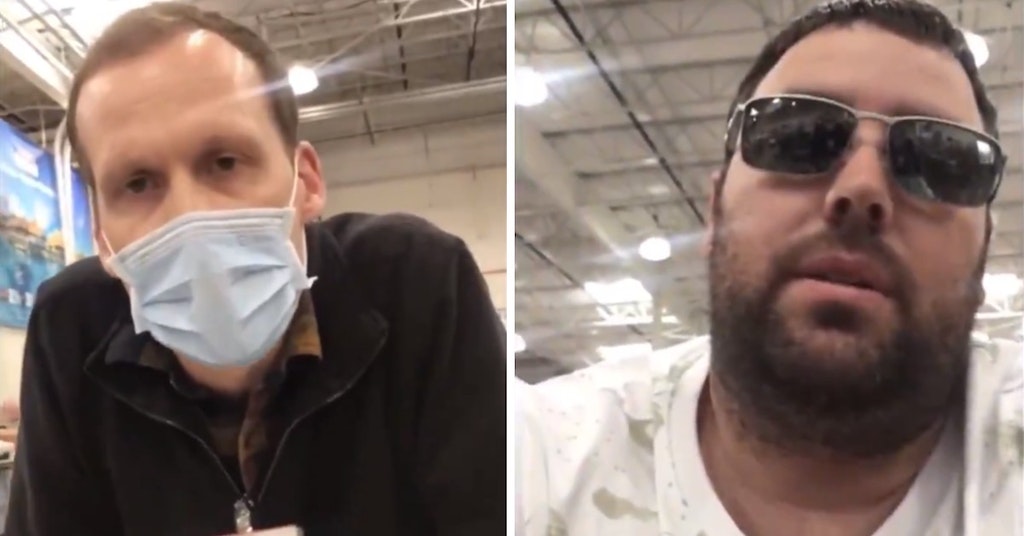 Exhausted Costco manager Tison is becoming a national hero after he was filmed kicking out a customer who was willfully defying the store’s mask policy. The young man patiently explained for the maskless man’s video that Costco requires customers to wear masks inside the store and that the video-taker was no longer welcome there—before taking away his cart.

The maskless man initially “threatens” Tison with his alleged 3,000 social media followers, but the manager simply waves to said followers and explains the very simple situation to them: “Hi everyone,” he says to the camera. “I work for Costco and I’m asking this member to put on a mask because that is our company policy.”

“And I’m not doing it because I woke up in a free country,” says the maskless man, turning his own video to reveal his face as well as that of a masked companion who looks almost as tired a Tison.

Tison then moves to take the man’s cart, repeatedly wishing him a nice day, before explaining clearly that he’s kicking the maskless customer out.

“You are no longer welcome here in our warehouse,” Tison says firmly. “You need to leave. Thank you very much.”

That’s when the maskless crusader gets real mad.

Of course, the items in the cart had not been paid for yet, meaning that they were still, in fact, Costco’s stuff.

The maskless man initially posted the video to Reddit himself but was reportedly flooded with highly unsympathetic comments and deleted it. Not, however, before other Reddit users downloaded the video. It’s now on a different Reddit thread on the “Public Freakout” forum, and has spread far and wide.

well i guess he really wants to know what a ventilator feels like down his throat, maybe he wants to FEEL the pain/burn of the virus lol

And he stands there wearing shirt & shoes. Carrying govt i.d. Flashed his club card to get in Drove his registered vehicle. Stopped for the red lights on the drive. Draws the line at infection control…..

Meanwhile, everyone is a fan of Tison.

I wonder if he has an issue when a restaurant refuses entry & service because you don’t meet their dress code… shirt, shoes or for some a dress jacket…

My mask protects you, YOUR MASK PROTECTS ME!

Thank you, Tison, for doing a job you should have never been made to do in the first place.