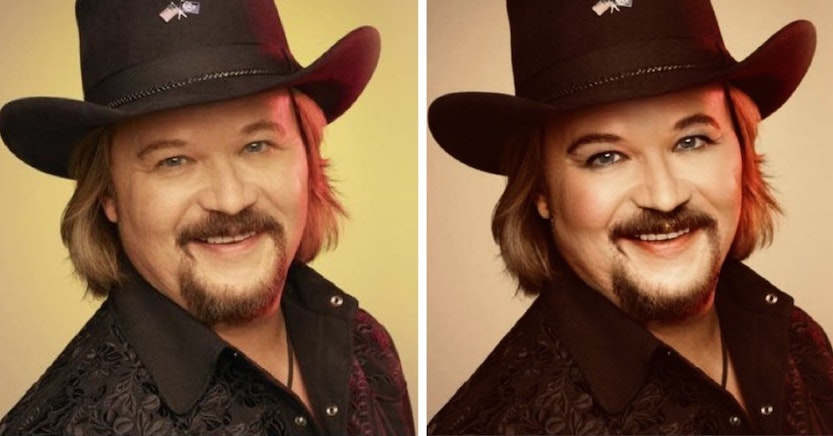 Sometimes complaining when people are making fun of you only makes it worse. That was the case for country singer Travis Tritt after he claimed that “the left” was spreading a Photoshopped image of him sporting some pretty nice makeup. He tweeted the photo to the world on Monday next to the original, showing everyone just how much his eyes can pop with some eyeliner and expert contouring.

Who complains about skin looking that smooth?

In spite of the quality of the edit, Tritt called the image “more proof of the dishonesty of the left” and claimed that its circulation was an “attempt to try to humiliate me.” Some have pointed to the phenomenon of fragile and/or toxic masculinity to explain why Tritt would find this glow-up to be in any way embarrassing.

Tritt has become something of a conservative, pro-Trump voice in recent months, proving himself to be part of a crowd that is especially susceptible to fragile masculinity. Earlier over the holiday weekend, he advised his followers to take the advice of James Woods and type “#resist” into the Twitter search bar and mass-block people with that in their names or bios.

If you want to accelerate the process of being blocked by Tritt, tweet about the photo.

Now that Tritt has exposed himself as being very sensitive about his appearance and the very idea about wearing makeup, it’s pretty much inevitable that everyone who is anyone would make fun of him more for it, though some of them seem more complimentary than anything. The following is just a small selection of the hilarity that ensued: