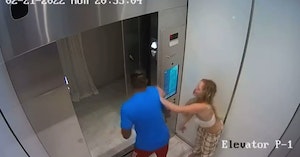 Model and social media influencer Courtney Clenney, better known as Courtney Tailor, has been arrested after months of investigation by police into the death of her boyfriend, Christian Obumseli, by stabbing.

Obumseli’s death was first reported back in April, alarming some Miami residents after people found out that she Tailor appeared to be missing and there were heavy indications that she may have been the one to kill the 27-year-old.

Tailor apparently reappeared and has now been officially arrested and charged with second-degree murder, and TMZ obtained security footage from an elevator showing an extended assault by Tailor on Obumseli that occurred months before his death. The video shows a visibly upset Tailor entering the elevator and striking the display to choose their floor repeatedly in anger before Obumseli tries to get her to stop, only to become her target for the entire ride.

The footage makes it clear that Tailor was the aggressor, as Obumseli only moves to defend himself from her repeated assaults, at one point nearly putting her into a headlock just so he can get the elevator moving. The warrant for Tailor’s arrest suggests that there was an extensive history of domestic violence throughout their relationship.

“Courtney and Christian had a tempestuous relationship since Nov 2020, with multiple incidents of domestic violence from both sides over the period of the relationship.”

In spite of the “both sides” claim, domestic violence experts widely believe the idea of “mutual abuse” to be a myth, as the vast majority of cases involve disproportionate power dynamics that the abuser uses to paint themself as a victim. When the facts are laid bare, such as in one particular celebrity abuse case we’ve all heard about, it nearly always becomes clear that there is one dominant aggressor manipulating and abusing the victim.

In the case of Tailor and Obumseli, some folks were initially alarmed that the police let Tailor go after the young man died of a stab wound with a six-inch blade in their apartment following an apparent altercation between the two. She was placed in a psychiatric hospital for a mandatory watch period after she reportedly threatened suicide to the police, but after that period, she was released from the hospital and the cops did not seem to bother to pick her up in spite of very serious allegations.

Some attributed this to the fact that Tailor is a white woman, and Obumseli was Black, and we all know how police treat people differently based on race.

“She used her white tears to save herself from any consequences for literally murdering a Black man in cold blood,” said one TikTok user on the subject.

We now know that Tailor confessed to killing her boyfriend, but claimed it was self-defense. She says she threw the knife at him after he pushed her to the floor, but this statement was contradicted by a medical examiner’s report saying that Obumseli’s death was caused by a forceful downward thrust. The blade was embedded three inches into the man’s body — deep enough to hit a major artery.

A close mutual friend of the couple, Ashley Vaughn, also said soon after Tailor’s stabbing that she was the one who seemed to be the sole aggressor in the relationship.

“From what we’ve personally experienced between the both of them, we believe that Christian wouldn’t put her in a position where she would need to stab him to protect herself.”