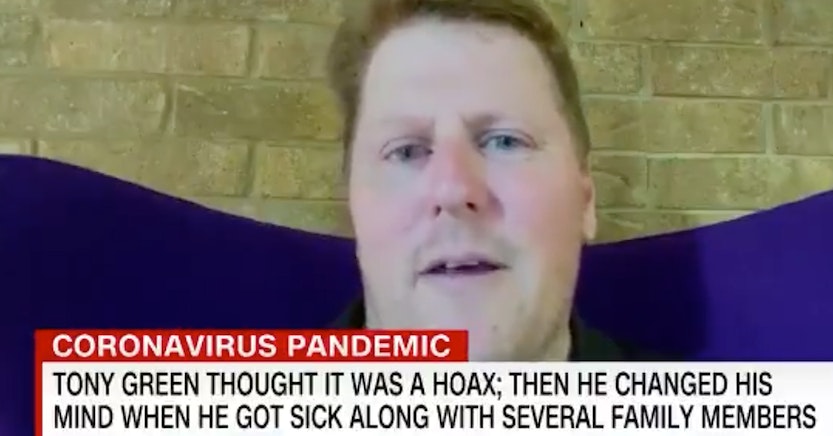 At this point in the pandemic, any people left who still aren’t taking COVID-19 seriously are likely to only change their tune if they experience firsthand the kind of damage it can do — and unfortunately, it’s often their own carelessness that allowed the virus to creep in and wreak havoc on their world.

Tony Green is feeling the guilt after a party he hosted for his family left himself and several others hospitalized as the novel coronavirus got passed among them. Two of his family members didn’t make it out.

“I used to call it the ‘scamdemic,’” he told The Washington Post of the virus. “I thought it was an overblown media hoax. I made fun of people for wearing masks. I went all the way down the rabbit hole and fell hard on my own sword, so if you want to hate me or blame me, that’s fine. I’m doing plenty of that myself.”

Green and his partner invited both sets of their parents to their Texas home after the governor said it was okay to start holding small gatherings again. They don’t know which one of them was originally infected and brought COVID-19 along with them, but within just a few days, all six family members were sick.

That six ultimately spread even further within the family, and who knows how many people were infected beyond that. Green’s father-in-law, who he called his best friend, died after being on life support for six or seven weeks. Another extended family member didn’t make it either.

Green described his own symptoms as starting out flu-like, then bizarre sweats and nonstop headaches, before he began to think he was better.

“I was thinking: ‘Okay. That’s it. Pretty bad, but not so terrible. I beat it. I managed it. Nothing worth shutting down the entire world over,’” he said.

But after believing he was on the road to recovery, Green blacked out on the stairs and had to be rushed to the hospital, where he discovered doctors had barely stopped him from having a massive stroke thanks to COVID-19 attacking his nervous system.

He later said in an interview with CNN’s Anderson Cooper: “The feeling that I have is kind of like what, I would say, a drunk driver would have if they killed their family,” he said. “It was unintentional. This was my home. This is where it happened. So, you know there is a sense of responsibility.”

“The party was my idea. That’s what I can’t get over,” he said. “I thought the worst was behind us. I was like: ‘Hell, let’s get on with our lives. What are we so afraid of?’”