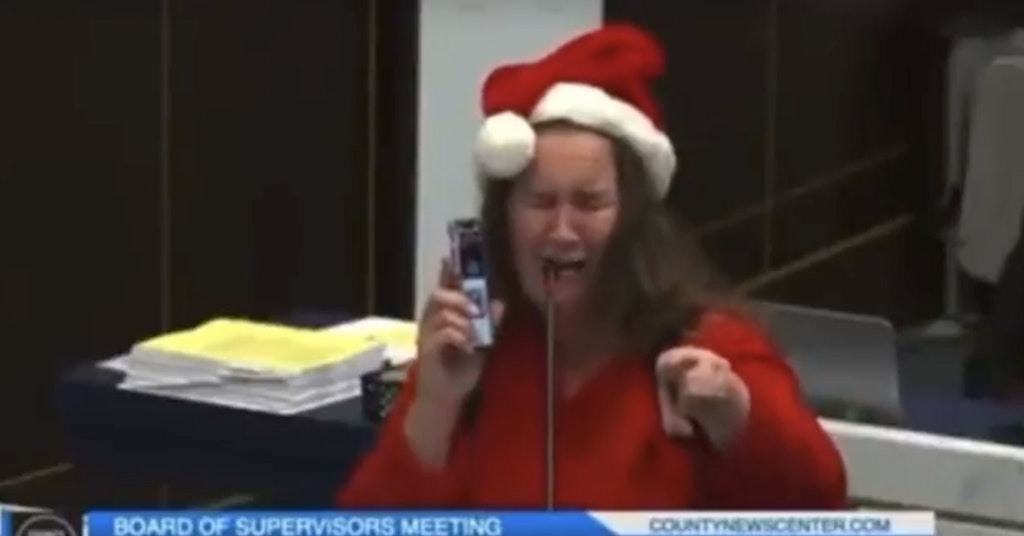 COVID-Denier Butchers ‘All I Want For Christmas Is You’ With Lyrics Pushing Ivermectin, Blasting Masks

The San Diego Board of Supervisors was in for an unwelcome treat recently after a woman popped by the meeting to sing a COVID-denying rendition of “All I Want For Christmas Is You.

Anti-vaxxers and anti-maskers seem to be doing anything they can to get attention and go viral in any types of meetings dealing with COVID restrictions, be they school, county, or otherwise. Their fellow rightwing conspiracy theorists praise them while the folks who actually want the pandemic to end just mock them on social media. Either way, the attention rolls in, and the downward spiral keeps going.

One woman named Bridgette decided to do something even more extra than most to get attention in San Diego as she pled with the board to believe in made-up treatments for COVID and complained about wanting “freedom.”

And she did it all to the tune of the most popular modern day Christmas song.

“Bridgette, let’s end this emergency,” she said as she started the music on her iPhone.

The lyrics that followed can’t possibly be considered clever, even by the standards of the right.

“I don’t want a lot for Christmas, just body autonomy,” she sang, if you can call it that. “I don’t care about the variants because of natural immunity. I just want my freedom now, the Constitution will show us how. Make my dreams come true, end the state of emergency and acknowledge early treatment, too.”

As the music ramped up, Bridgette continued her off-key lyrics and disastrous attempts at vocal runs by listing off a bunch of things she believes will treat COVID, including all the greatest hits such as ivermectin, hydroxychloroquine, and zinc. She also bemoaned wearing a “useless mask” before jumping right back to the Constitution again.

Bridgette’s foray into the world of music was predictably poorly received by folks on the internet, who seem to both believe in science and prefer to listen to singers who can at least stay somewhat on key.

If we’re revisiting the idea of a “war on Christmas,” this should definitely be submitted as evidence. A war on Christmas, an assault on good sense, and a pummeling of everyone’s ear drums.