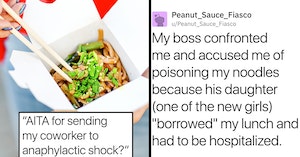 It takes a special kind of weirdo to purposely steal a co-workers lunch at the office, and particularly to keep doing it. And in one office where this kept happening, it also turned out to be fairly dangerous.

A Redditor going by the name u/Peanut_Sauce_Fiasco had been working an office job by day and moonlighting at their friend’s Thai restaurant, and learning how to cook certain dishes in the process. She started making her own lunches and bringing them into work, but by the time she would get to the refrigerator for mealtime, her food would be fully or partly gone.

Despite taking the issue to both her boss and HR to try to get things resolved, her food kept disappearing. Then, one day, she decided to make and bring in Thai noodles for her meal — Thai noodles that had peanut sauce on them.

“My entire tupperware was missing, which hasn’t happened before,” she wrote. “I’m pissed, but what can I do? A coworker shared her pizza with me and that was that, until today. My boss confronted me and accused me of poisoning my noodles because his daughter (one of the new girls) ‘borrowed’ my lunch and had to be hospitalized.”

And this is one of several no-brainer reasons as to why you don’t steal someone else’s food. The coworker was allergic to peanuts, had to use an epipen, and wound up in the hospital.

“Now her dad is trying to hold me accountable for her bills and condition, but I don’t see it. Why should I pay? I don’t mark my food as an allergen because I’m not allergic to it, she was just dumb enough to steal from me and eat something she can’t have,” the redditor wrote.

While she knows she’s legally in the clear, she said that some of her coworkers were being rude to her because they assumed she had figured out the boss’s daughter was the one stealing her food and purposely included an allergen. Despite clearing things up (and waiting on a response from HR), she’s still thinking about leaving to go work at her friend’s restaurant full time because of the uncomfortable air that has been created.

Fellow Redditors were frustrated on her behalf, and appalled that someone — especially someone with a peanut allergy — would be so gutsy as to steal food from a coworker like that.

And yes, in case you were wondering, the post does end with the recipe.