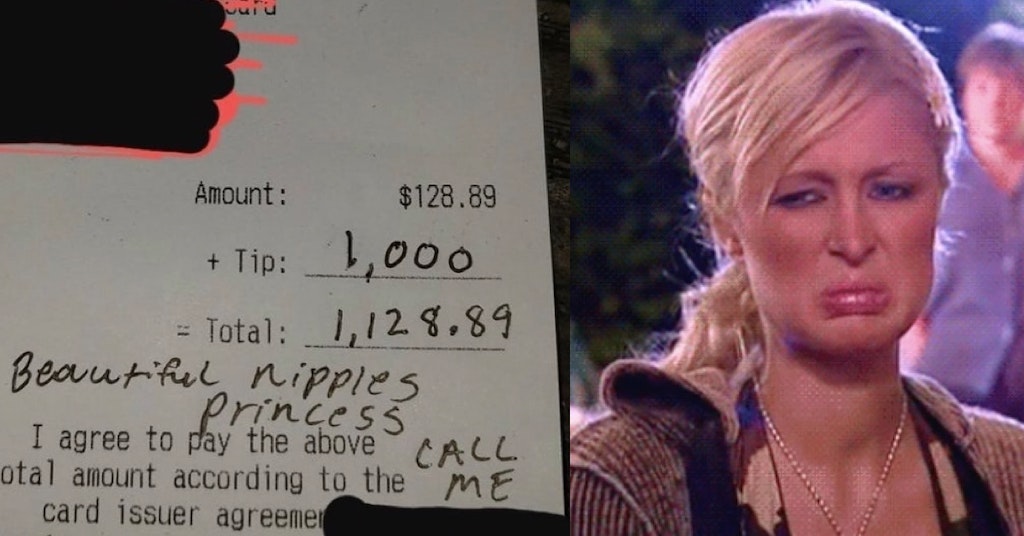 Man Leaves Creepy Note For Waitress On Receipt With A $1,000 Tip

Working in a restaurant is a very demanding job physically and emotionally, because part of the job is pretending to be polite and friendly to lots of horrible customers. Okay, not all customers are horrible, but the one who wrote this note on a receipt for his waitress definitely is.

A photo of the receipt went viral after being posted on Reddit by u/Zayyded, who may or may not be the waitress in question.

The receipt shows that the man left a $1,000 tip on a bill for just over $128. That must have made him think he was entitled to a little sexual harassment because underneath that he wrote her a note saying, “Beautiful nipples princess.”

He also implored her to call him, and signed the bill, “The Master.”

There was also a scrawl of what seems to be a social media handle, and the crew in the Reddit comments did uncover what appears to be a weird troll account of a man obsessed with nipples, which has since been suspended. They also deduced that the restaurant named “Moonshadows” most likely belonged to a high-end place in Malibu, and was not a strip club as some people wondered.

Some joked that they’d show their nipples for a thousand dollars, but if this person is real, just serving them a meal was probably horrible enough and that server earned every cent just by talking to him.

One person said that the big tip thing is a scam, and that The Master will be disputing that charge later:

Others are convinced that the whole thing is a fake, with someone pointing out that the bottom of the receipt is cut off, so this must be the “customer copy” not the “merchant copy” that generally goes to the restaurant.

Here’s a real tip: it doesn’t actually matter which copy you sign, as long as there’s a signature the restaurant can keep. Spoken as a former waitress. Take the money and throw away The Master.