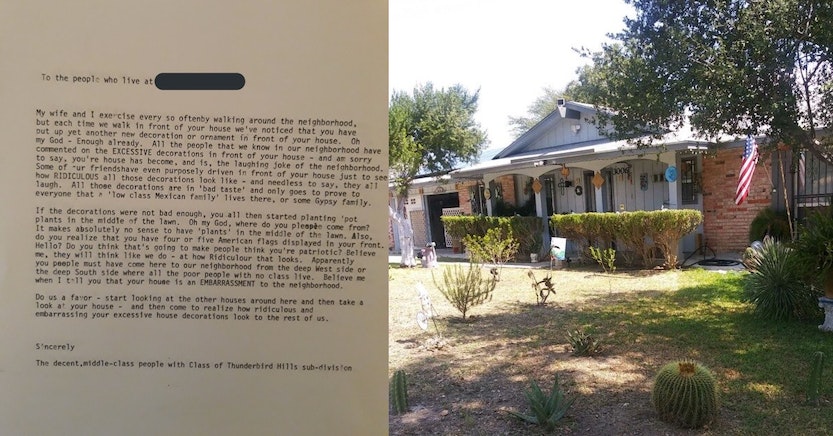 Theoretically, the great thing about finally owning your own house is that you can do whatever you want and not have a landlord breathing down your neck about paint or holes in the wall or whatever else you sometimes need to do to make a house feel like home.

Except, unless you move to the middle of nowhere, there’s a good chance you’re still going to be dealing with neighbors — who sometimes seem to feel even more entitled to landlords to tell people what to do or not do with the place they live.

Twitter user @goldenstef recently shared a particularly aggressive note her grandfather received from his neighbors — not an HOA, just neighbors — demanding he stop decorating his house because they didn’t like looking at it when they walked by.

The letter is obviously already off to a terrible start, overstepping boundaries and being jerks about it. But from there, it just devolves into straight-up cruelty.

“All the people that we know in our neighborhood have commented on the EXCESSIVE decorations in front of your house — and am sorry to say, you’re [sic] house as become, and is, the laughing joke of the neighborhood. Some of our friends have even purposely driven in front of your house just to see how RIDICULOUS all those decorations look like — and needless to say, they all laugh,” it continues.

Not only do the anonymous letter writers go on to grossly complain that the house “only goes to prove to everyone that a ‘low class Mexican family’ lives there,” but they dedicate an entire paragraph to chastising this poor old grandpa about having plants in the middle of his yard and putting up some American flags.

“Apparently you peeple [sic] must have come here to our neighborhood from the deep West side or the deep South side where all the poor people with no class live. Believe me when I tell you that your house is an EMBARRASSMENT to the neighborhood.”

After all that, the anonymous letter writer has the gall to refer to themselves (and all the other neighbors who supposedly feel the same way as “decent, middle-class people with Class” in the sign off.

People were absolutely livid on behalf of @goldenstef’s grandfather, who clearly takes pride in decorating his property and now has to feel bad because some grumpy neighbors want to act like they’re still in middle school, stirring up drama.

Eventually, @goldenstef was able to get out to her grandpa’s to take photos of his house for all the curious folks online. And while yes, it’s obviously decorated, the idea that anyone would write a whole letter berating someone over this house and yard is even more baffling now that we’ve seen what it looks like.

If you think this house is gaudy and offensive, you clearly have not lived anywhere interesting at all, “decent, middle-class” nosy neighbors.

But even if there actually was anything to the claim that this is some hideous eyesore that upsets and distracts you every time you walk by, the idea that anyone would take that to the next level and write a cruel note with the intention of making someone feel bad is just reprehensible. As just about everyone said in response to @goldenstef’s original tweet — people really need to learn how to mind their own business.